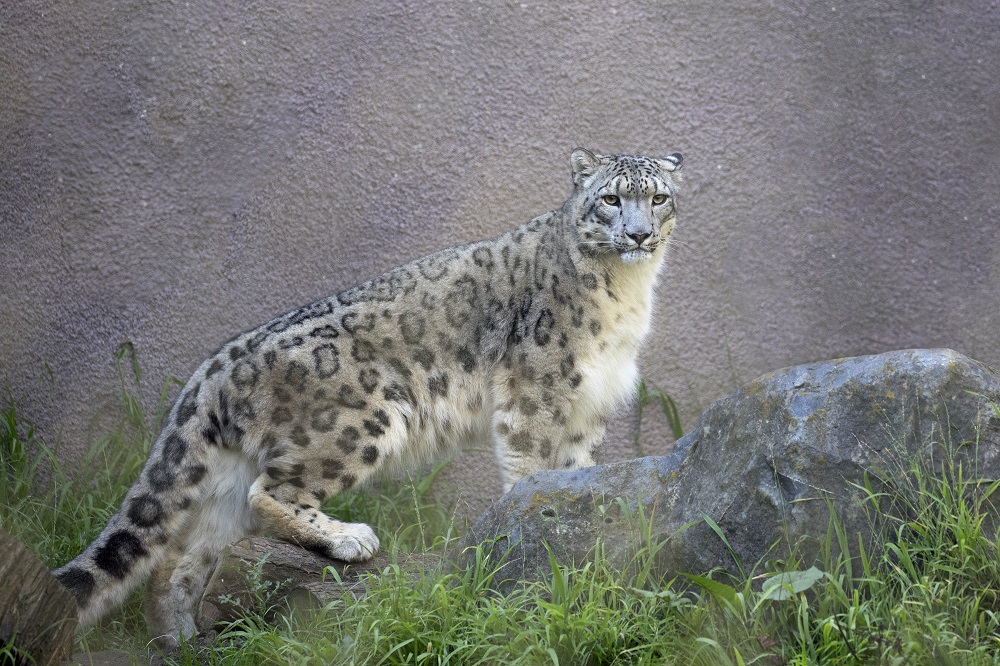 You can find our snow leopards in the netted enclosure outside the Lion House near the Lion Fountain. We welcomed one male and one female cub on June 7, 2018 to first time parents Dawa and Jimmy G.

Snow leopards are smaller than other large cats; males only growing to 100-155 pounds and females from 60-120 pounds. Despite their small size, they are well adapted to living in a severe mountain habitat. Their fur is long and thick, with wooly undercoat for extra warmth. The fur is soft gray to light brown, and the head and lower limbs are marked with black or brown spots. The body is covered with brown, dark grey or black rosettes ringed in dark brown or black. These markings provide excellent camouflage both in snow and among rocky terrain. The rounded paws have large hairy pads that act as snowshoes and also protect the paws from rocks. The snow leopard uses its long tail for balance and for extra warmth when wrapped around itself. They have an enlarged nasal cavity which helps them warm the cold air as they breathe and retain water.

They have short forelimbs and long hindlimbs, making them agile in steep terrain. Snow leopards are also superb jumpers. When stalking prey, they can easily leap distances of 50 feet and up to 20 feet high.

Lifespan is 10-13 years in the wild and about 20 years in captivity.

Snow leopards are carnivores. In the wild, they eat a variety of mammals and birds  ibex, blue sheep, musk ox, hares, marmot, ptarmigan, and pheasant. At the Zoo, the cats are fed a diet of fortified horse meat. This muscular, well-built cat can bring down prey more than three times its size.

Snow leopards are nocturnal and solitary, but not unsociable. During breeding season they have occasionally been seen hunting in pairs. Ranges often overlap so scent marking with urine and by rubbing along rocks is used to communicate with other snow leopards in the area.

Breeding season is from January to mid-March so that births can occur in the spring, about 95-105 days later. Females give birth in a well-concealed den which is lined with her fur. The typical litter is three cubs or less, and the spots on the cubs are black. Cubs open their eyes after about a week and they become very active by two months. Young stay with their mothers for around two years;  they seek out their own territories. Since cubs are dependent on females for so long, breeding only occurs every 2 – 3 years.

Snow leopards are listed as endangered by IUCN and on Appendix I of the CITES. A recent census estimated that there are 4,500 – 7,000 left in the wild. It is difficult to determine their exact number as they are so elusive and blend in with their environment. Illegal poaching is a major threat to their population. Snow leopards are killed for their fur and for bones which are used in traditional medicines. Other threats include loss of prey and human conflict, as snow leopards sometimes prey on domestic livestock and are killed by herders in retaliation.

The San Francisco Zoo is partnered with the Snow Leopard Conservancy, an organization that works in seven snow leopard range countries to address human-animal conflicts and  local communities to protect this incredible species. The zoo has also had a very successful breeding history of snow leopards, producing 30 snow leopards since 1969.

What can you do to help snow leopards?