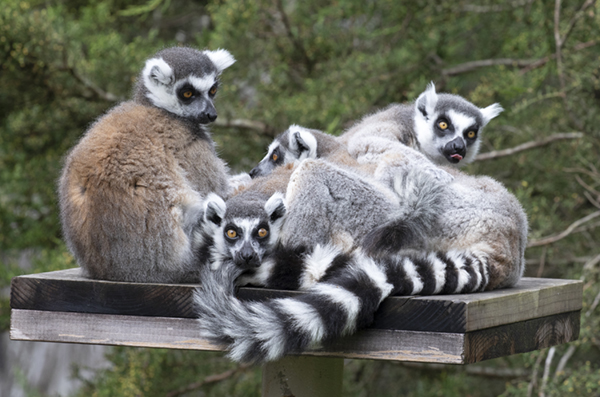 The Zoo has seven different species of lemur in the lushly forested Lipman Family Lemur Forest.

Ring-tailed lemurs are a medium sized lemur, weighing between 5 – 8 pounds, with a head and body length of 14 to 17 inches, and a tail up to 21 inches in length. They have a fox–like muzzle, prominent ears, and dense fur. The back is usually reddish–brown with the rump and limbs a light gray or gray–brown, and a darker gray crown and neck. The underparts are white or cream, lightly haired, with dark skin showing beneath. The tail is ringed in black and white with a black tip. The forehead, cheeks, ears and throat are white and dark gray, and there are black rings around the eyes. Hind legs are long; the forelegs are short.

Lifespan is about 15 years in the wild, and up to 30 years under human care.

Ring-tailed lemurs come from south and southwestern Madagascar, although there is a small isolated population in the southeast plateau. They are found in a wide range of habitats including: brush and scrub forests, closed canopy deciduous forests, dry and rocky mountainous areas with patches of deciduous forests.

In the wild, ring-tailed lemurs primarily eat fruit, leaves, flowers, bark and sap. Occasionally, these lemurs will eat insects and small lizards as well. At the Zoo, they are fed a diet of fruit, vegetables and leafy greens.

Ring-tailed lemurs are social animals, living in mixed groups of 3 to 25 individuals, with a well-defined hierarchy. Females are dominant over males, and remain in the area where born, while males move between groups. They have well-defined, non-overlapping territories within their home ranges. Territorial encounters tend to consist of opposing groups of females running at each other and uttering a threatening call until one group retreats.

Fights among males range from a threatening stare, through lunging and cuffing, hair pulling and serious biting, to “stink fights” wherein males impregnate their tails with scent and then shake and quiver the tail over the head at their opponent.

Ring-tails are the only surviving semi-terrestrial diurnal lemur in Madagascar. They forage and travel at all levels in the forest, running along branches or leaping between them, with their powerful hind legs touching first.

Their vocalizations are reminiscent of purring cats, leading them to be sometimes referred to as “cat lemurs”. They also utilize shrill screams, bark-like cries as warnings and loud hooting calls at night before going to sleep. Ring-tailed lemurs also communicate through scent marking. Males have a specialized spur on their wrist that gives them the ability to impregnate trees with their scent.

Mating occurs from April to June with births in August to October. Since females are fertile for only a very short time, all the offspring in a group are born within a few days of one another. After a gestational period of 130 – 144 days usually one infant is born, but twins are not uncommon. Newborns are 4 inches in length with the adult coloration. The infant clings to its mother’s front and within three days of birth is moving around actively on its mother. By two weeks the infant is riding on her back and weaned by five or six months.

Ring-tailed lemurs are listed as endangered by the IUCN and on appendix I of CITES. Habitat loss is a major threat for this species. The gallery forests that these lemurs prefer are being converted into land for farming, grazing and charcoal production. Additionally, they are hunted for food in part of their range as well as collected for the pet trade.

The San Francisco Zoo participates in the Association of Zoo and Aquarium’s Prosimian Taxon Advisory Group and the Malagasy Fauna Interest Group.