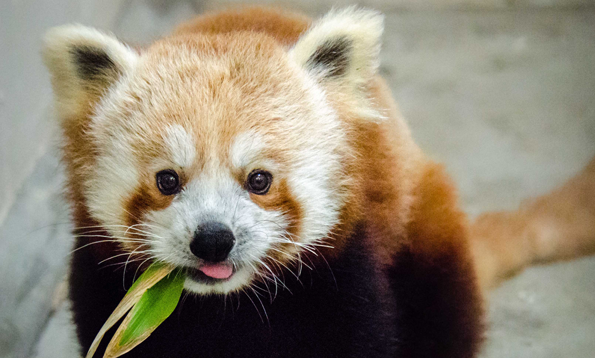 You can find the red pandas in the Exploration Zone across from the Insect Zoo.

Red pandas have a thick coat of fur that keeps them warm and provides camouflage in lichen-covered vegetation. They have reddish-brown upper parts, blackish bellies and limbs and a pale face and ears. Their non-prehensile tail is marked with red and cream rings and helps them balance while climbing. Like giant pandas, red pandas have a special bone in their wrist, which acts as a thumb and allows them to grasp bamboo.

Lifespan is about 8 years in the wild and up to 10 under human care.

Red pandas are found in mountain forests in parts of China, Bhutan, Nepal, Myanmar, and India.

They feed mainly on young leaves and shoots of bamboo, but will also eat roots, fruits, eggs or small reptiles when available. At the Zoo, they eat bamboo and primate chow.

Red pandas are solitary except females with young. They have a slow metabolism due to their mainly folivorous diet and are most active at dawn and dusk.

They have a slow reproduction rate, breeding only once a year. Breeding season usually occurs between January and March. One to four cubs are born after a gestation period of approximately 135 days. Females build several nests in hallow trees or rock crevices and will move young frequently. Cubs are independent after about one year.

Red pandas are territorial and use scent, urine and communal latrines to mark their range. They are generally quite animals but will use some whistling vocalizations. Head bobbing and tail arching are also used to communicate.

Red pandas are listed as vulnerable by the IUCN. Major threats include habitat destruction and fragmentation due to farming, logging and human development. In parts of its range poaching and inbreeding are significant threats as well. In China, red pandas live in several protected reserves created for giant pandas but more action is needed.

What can you do to help red pandas?