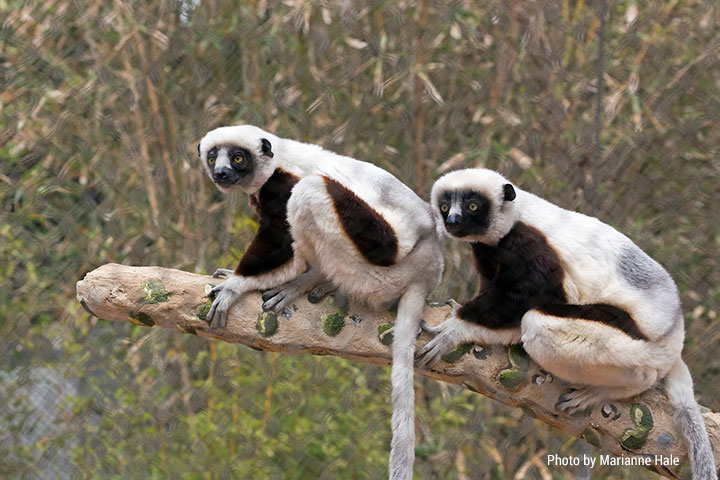 You can find the sifaka in the sifaka habitat, an extension of the Lipman Family Lemur Forest, which includes a giant baobab tree climbing structure along with plants native to Madagascar.

Coquerel’s sifaka are easily recognizable medium-sized lemurs. They are mostly white on the head, body and tail with brown patches on the chest, arms and thighs. Their face is bare and black in color except for a small patch of white fur along the bridge of the nose. Ears, bottoms of the hands and feet are also black. Their large eyes are yellow.

Their long tail is used for balance when leaping from tree to tree. Sifaka have pseudo-opposable thumbs and an exceptionally long first toe that provides a strong grip on vertical tree trunks. Their long, powerful legs are an important adaptation for vertical leaping.

Sifaka, like other lemurs, have a grooming claw on the second toe of the hind foot and a dental comb formed from their lower incisors.

Coquerel’s sifaka are found in dry, deciduous and mixed forest in northwestern Madagascar. They have also been known to inhabit costal mangroves in the same region.

They are omnivores, primarily feeding on a variety of leaves, but will also eat fruit, flowers, seeds and bark.

Coquerel’s sifaka are diurnal and primarily arboreal; moving through trees by vertical clinging and leaping. They rely heavily on scent marking to define territories. Males mark using a gland near their throat while females use a gland near the tail.

They live in social groups of 3 – 10 individuals. Like many lemurs, this species of sifaka are matriarchal. Females have preferential access to food, choice of mates and make decisions about foraging locations. Females may also mate with more than one male, which is thought to help avoid infanticide.

Breeding is seasonal and, in the wild in the Southern Hemisphere, occurs in January or February. Young are born during the dry season, from June to July, after a gestation period of 162 days. In the Northern Hemisphere, breeding patterns may shift by six months. Infants will cling to its mother’s chest until about a month or so after birth, and then transfer to her back. Young are weaned independent at around 6 months of age. Upon reaching sexual maturity, at about 2 – 3.5 years, males leave their family group and join another.

The Coquerel’s sifaka is listed as endangered by the IUCN and are protected under Appendix I of CITES. Habitat loss and fragmentation are major threats for this species; mostly due to slash and burn agriculture, deforestation for livestock farming, and charcoal production. Local traditions typically prevent the hunting of this species for food but it has recently become a threat, even in protected areas.