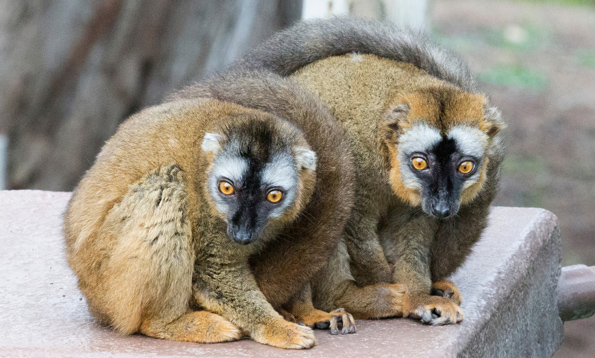 Red-fronted brown lemurs make up one of seven different species of lemur found in the lushly-forested Lipman Family Lemur Forest, the largest multi-species habitat for lemurs in the country.

They are a medium size lemur with a long tail and a black face, muzzle and forehead. Like some other lemur species, red-fronted brown lemurs are sexually dichromatic. Males have grey-brown fur with a creamy grey belly and a reddish crown on their head. Females are reddish-brown with a grayish crown. Both genders have orange eyes with white patches of fur on their cheeks and above their eyes.

Lifespan is 20-25 years in the wild and a bit longer in captivity.

Their diet consists of mostly fruit but they will also eat leaves, bark, flowers, sap, and insects.

Red-fronted lemurs are social species that live in mixed groups consisting of up to 18 individuals. Social behavior varies depending on the range, however.

In the west, one male is usually dominant over the females in the group. Mating occurs in May and June and a single young is born in September or October. Young are carried on the mother’s belly for the first month then move to her back. Males have been known to assist with care of young. At about six months the juveniles are independent and will be ejected from the group. Group size is about the same in the east but dominance is not strictly defined. Breeding occurs seasonally and births coincide when fruit is most available.

Groups in the west are primarily diurnal but will occasionally shift to nocturnal in the dry season. In the east, populations are generally diurnal with periods of rest throughout the day. Social bonds within both populations are established and reinforced by grooming. Like other lemurs, this species has a tooth comb formed from the lower six incisor teeth that is used for grooming.

Red-fronted brown lemurs are listed as near threatened by the IUCN. Habitat loss is the primary threat for this species. In the west, forests are being cleared for pasture; while in the east, forests are lost due to slash-and-burn agriculture and charcoal production. They are also one of the most commonly hunted lemur species in Madagascar.

The red-fronted brown lemur is protected in several Madagascar parks and reserves and is not thought to be seriously threatened.