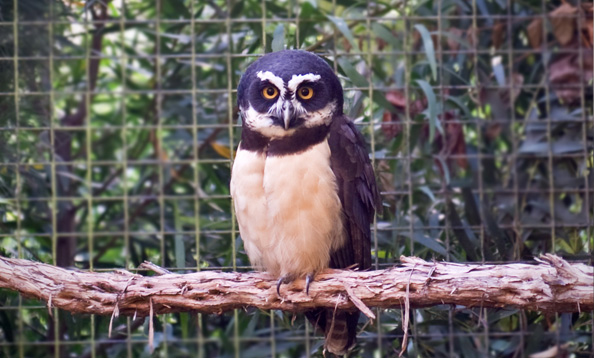 The spectacled owl can be found near the Family Farm in the Exploration Zone.

The spectacled owl is a sizable owl, weighing in at up to 1.9 lbs and 18 in. long. As with many birds of prey, females tend to be larger. The bird has brown upperparts, head and upper breast, while the underparts are buff-white. They are named for the white facial markings around the eyes, giving the owl a “spectacled” appearance. The eyes are yellow and the beak is pale.

Juvenile spectacled owls look like a completely distinct species; they are mostly white with a brown facial disc. It can take up to five years for young to acquire their adult plumage.

This owl has an extremely large range; it is found throughout Mexico, Central America, and South America to northern Argentina. Additionally, they have been found in a few Caribbean Islands, including Trinidad and Tobago, They inhabit dense tropical and sub-tropical forest, and woodlands near water.

They primarily eat small mammals, insects, birds, reptiles, frogs and crustaceans. These birds have also been known to prey on bats or mammals as large as skunks.

Pair bonds are monogamous and can last several years. Breeding season varies depending on the location but usually occurs in the dry season or beginning of the wet season. Nests are created in tree cavities, where the female lays 1-2 eggs. A pair may both help incubate but females take over most of the responsibility over the 36-day period. Chicks fledge after only 5-6 weeks but will remain near the nest, coming back for food for up to a year.

Spectacled owls are listed as least concern by the IUCN. Their population size is large and stable at this time. However, tropical deforestation is likely to impact this species in the future, as it reduces prey and nesting habitat.