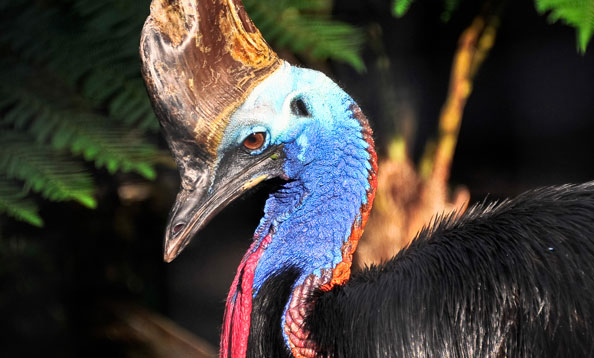 The Zoo’s large forested cassowary exhibit is between the Australian WalkAbout and South American Tropical Rainforest and Aviary.

Cassowaries are massive birds that can measure up to six feet in height and weigh 100-150 pounds. The southern cassowary is the largest of the three species of cassowary. The feet have three toes with a stout claw, while the middle toe has a long dagger-like claw. They have long, powerful legs and can run up to 30 miles per hour through thick underbrush with the neck stretched forward and body horizontal. The black-colored plumage is extremely hard and coarse, protecting the body from thorns and sharp leaves. The head and neck are a brilliant blue and red. Female cassowaries are larger than males and generally brighter in color.

Chicks have brown and creamy-white stripes, eventually fading to brown after about six months. Juvenile coloration darkens as the birds mature, which takes around three years.

Cassowaries have a structure on the head resembling a helmet, called a casque. The purpose of the casque is not fully understood. The most common theory is that the animal uses it to force its way through dense vegetation, avoiding injury to its head. Observation of captive birds shows it being used as a shovel in search of food among leaf litter. Just like the wattles, brightly colored folds of skin on the head and neck, the casque may also be an indicator of social status and dominance, as it grows slowly throughout the bird’s life.

They are great jumpers; maneuverable in dense forest spaces, and surprisingly, excellent swimmers and divers.

Lifespan in the wild is 12-19 years in the wild, and around 40 years under human care.

Cassowaries are found in the rain forest and savanna woodland areas of New Guinea and northeastern Australia.

They eat a diet of fruit, insects, eggs, frogs, fungi and carrion.

They are solitary except in breeding season, and are very territorial. They are active in the morning and late afternoon, and occasionally during moonlit nights. Usually shy, a cassowary can become quite aggressive during breeding. This is especially true when accompanied by chicks, or cornered. To defend themselves they use their sharp clawed feet to kick predators.

These large birds produce a variety of sounds, ranging from booming low frequency territorial calls to the coughing call used by an adult male to maintain contact with chicks.

Cassowaries tend to breed when fruit is most abundant, usually from June to October. The male makes the nest, a shallow depression scooped in the ground and lined with grass and leaves, well camouflaged in the rainforest. Males only mate with a single female, but once 3-5 green eggs are laid, the female goes off to find another mate and usually lays two or three clutches during one breeding cycle. Like emu and rhea, the male remains with the eggs and cares for chicks after they hatch.

Eggs are incubated for about 60 days, and chicks are able to walk and feed themselves within a few hours. Male and chicks leave the nest after about two days, and stay together about nine months.

Southern cassowaries are listed as vulnerable by the IUCN. Their population has declined in some parts of their range by more than 30% over the last 30 years. Habitat loss and hunting are major threats.

In New Guinea, feathers are used for ceremonial headdresses and the increase in price in native markets has intensified hunting pressure. In some parts of their range, cassowaries are hunted for bushmeat as well. Additionally, chicks suffer heavy predation by dogs and feral pigs; this predation may have a serious effect on cassowaries in Australia.

So, what can you do to help to save southern cassowaries?

Support conservation efforts of organizations like Rainforest Rescue, Save the Cassowary and AZA accredited zoos. Spread the word about southern cassowary conservation!