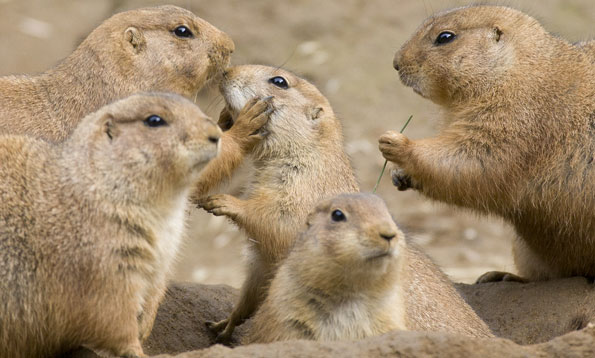 The Zoo’s black-tailed prairie dogs can be found in the Exploration Zone’s popular Meerkat and Prairie Dog exhibit, featuring two burrowing animal species from different parts of the world. Both species can be seen up close through viewing windows and visitors can learn about the fascinating underground world of these animals through interactive activities and displays.

There are over 20 prairie dogs in the colony at the Zoo – see how many you can count next time you visit!

Prairie dogs have a stout, squirrel-like body and short legs. Adults stand about 12 inches tall and weigh from one to three pounds. They’re tan to pale brown in color with a flattened black-tipped tail. Prairie dogs stand on their hind legs when looking for danger.

Life span in the wild is 3-5 years, and up to 8 years under human care.

Black-tailed prairie dogs inhabit the open plains and plateaus of the Great Plains from Montana and southern Saskatchewan to extreme northern Mexico.

Black-tailed prairie dogs are known as a keystone species and play an important role in prairie ecology. More than 165 species of animals and insects depend on them for survival, including black-footed ferrets, coyotes, bald eagles, swift fox, golden eagles and mountain plovers. Plants and invertebrates also rely heavily on prairie dogs. Their extensive burrows acts as homes for such animals as burrowing owls, snakes and badgers. They are a critical food source for many mammal and bird species, and the constant burrowing activity of prairie dogs works to loosen the soil, unearthing insects that birds eat.

In the wild, the prairie dog diet consists primarily of grasses, roots and blossoms. Grasses make up about three quarters of their diet, and in the spring and summer, each prairie dog consumes up to two pounds of vegetation per week. At the Zoo, the prairie dogs eat vegetables, monkey chow, peanuts and plant browse.

Prairie dogs have a highly organized society. They live in social groups called colonies or “towns” that are subdivided into wards and then into smaller family groups called coteries, which altogether may cover areas up to 160 acres. These inter-connected burrows provide the prairie dog with refuge as well as a place to rear their young.

Prairie dogs feed above ground during the day, but use burrows for safety at night and for rearing families. The whole colony helps dig the elaborate underground tunnel system that may reach lengths of 100 feet and depths of 15 feet. The burrows consist of several chambers, including a nursery, a latrine, a grass-lined nesting chamber, and a listening post located near the surface where the inhabitants keep tabs on above-ground activities that might spell danger.

Black-tailed prairie dogs have a sophisticated communication system; with a host of calls, postures and displays that are used to alert the group of the presence of predators, such as coyotes, bobcats, badgers, black-footed ferrets, golden eagles and hawks. Scientists have discovered that prairie dogs can even discriminate between airborne and ground predators, as well as individual humans dressed in different clothing! An alarm call is sounded to warn of a predator: a sharp bark, followed by a quick descent into the burrow. When the predator is gone, a special “all-clear” call informs family members that the danger has passed. Other communications include mouth-to-mouth contact, or “kissing,” used to identify coterie members from those outside their group.

Black-tailed prairie dogs are listed as least concern by the IUCN. Though population is declining due to destruction of habitat, prairie dogs are still rather common. In the early 1800’s, they roamed most of the western United States and numbered about five billion. Today, 99% of that population is gone, attributed to a decades-long government-funded eradication program that eliminated prairie dogs by hunting and poisoning. Farming and development since then has reduced the prairie dog’s habitat to less than one percent of its historic size – from over 100 million acres to less than one million acres.

Many ranchers mistakenly believe prairie dogs compete with cattle for rangelands, when in reality they have a symbiotic relationship whereby prairie dogs serve as natural fertilizers, improving the forage for cattle while cattle grazing allows prairie dog colonies to expand.