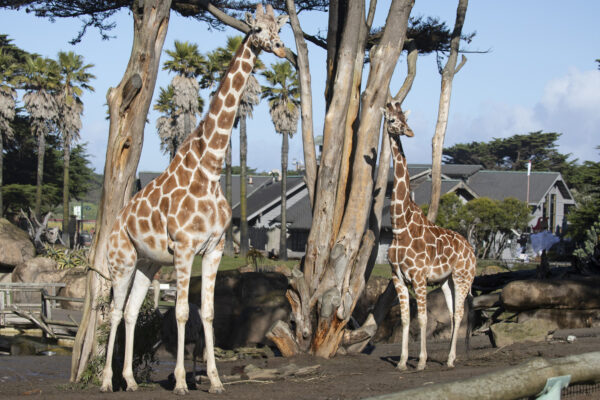 You can find our giraffes roaming in the Leanne B. Roberts African Savanna.

As the tallest living land animal, they can grow to a height of 14-19 feet. The giraffe has long legs with large, heavy feet and a distinctive long neck. Males weigh from 2,425 – 4,260 pounds, while females tip the scale at 1,543 – 2,605 pounds. They walk in an unusual way, with legs on one side moving at the same time in order to avoid tangling their legs.

A giraffe’s height requires a specialized, large heart to pump blood to the brain as well as unusually elastic blood vessels with a series of valves that help offset the sudden build up of blood when the head is raised, lowered or swung quickly.

The reticulated giraffe has medium to reddish brown splotches broken by cream colored borders, the name “reticulated” refers to this net-like pattern. Coat patterns are distinct for each giraffe subspecies. They have a short, stiff mane and long tufts of hair on the end of the tail. The eyes are large and shaded by long black lashes.

Both sexes have two to five blunt, short hornlike structures on top of the head called ossicones. A female’s ossicones are covered with tufts of hair, while male’s are bald. As males age they develop a large calcium deposit on the top of their head as well. When battling, giraffes swing their long necks and use these structures help deliver a heavier strike.

Reticulated giraffes inhabit level savanna regions, preferring grassland with scattered trees and lightly wooded areas. This subspecies is found south of the Sahara, from northern Kenya to Ethiopia and Tanzania.

Giraffes are herbivores and browsers. They feed mainly on branches and leaves from acacia trees, although they have been known to eat as many as 100 other plant species. At the Zoo, the giraffes eat acacia, alfalfa, giraffe chow and vegetables.

Giraffes form loosely organized groups of 2-20 animals. Female giraffes are more social and usually found in groups, especially females with young. Adult males are solitary but a hierarchy exists and determines which males, called bulls, mate with females. Giraffes are not territorial but do have home ranges and prefer areas with an abundance of acacia.

Giraffes are generally quiet animals but they are capable of mooing, bleating, and bellowing. They may also grunt, snort, cough, whistle, and growl.

Breeding occurs throughout the year but peaks in the rainy season. Giraffes have an extraordinarily long gestation period of 422-450 days after which a single calf is born. Calves enter the world in a rather shocking manner, as females give birth standing up, calves drop from nearly six feet in the air. Newborns are 67-79 inches tall, weigh from 100-150 pounds and can stand within an hour of being born.

Giraffes are listed as Vulnerable by the IUCN. Their total population in the wild is less than 100,000. However, this subspecies has been wiped out in most of western and southern Africa and other subspecies are threatened by population decline as well. The only large reticulated giraffe populations remaining are in Tanzania and adjacent areas. Giraffes are hunted and poached for their skin, meat, and tail, but habitat destruction is their greatest threat.