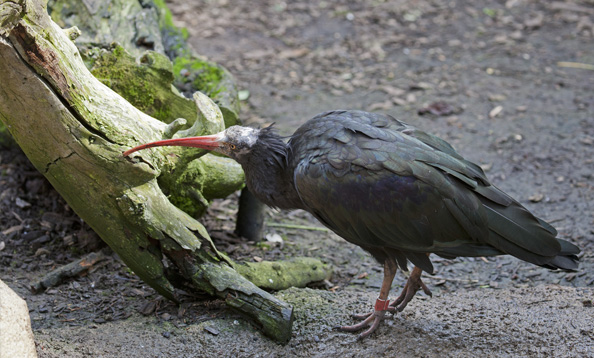 You can find our waldrapp ibis colony in the African Aviary, near the African Savanna exhibit.

The San Francisco Zoo’s colony has produced offspring for each of the last three years, contributing to the AZA Species Survival Plan for waldrapp ibis. With just over 100 waldrapp ibis in North American zoos, every young ibis is important to the success of the species!

These birds have a mostly black plumage with iridescent shades of green, violet and blue. Their head and neck are red and featherless, with exception to a shaggy ruff of feathers around the base of the neck. Their long downward-curving bill is also red. Both males and females have this coloration and are about the same size. Juvenile birds are duller in color, lacking the iridescent sheen, and have a grey head.

Lifespan is about 24 years.

Historically these birds had a large range; today, they exist in small areas in Morocco, Syria and Turkey. They are found mostly in open, dry areas but also inhabit coastlines, wetlands, shallow river banks and rocky areas.

These gregarious birds gather in groups of just a few individuals to around 100 birds. During most of the year they are found in loosely structured flocks of about 40. They spend much of their time foraging together during the day and roosting in trees or cliff edges at night. In the western parts of their range the birds are not migratory, but do tend to make seasonal migrations in Syria.

In February and March, they build nests of sticks on ledges of high cliffs near water. Both male and females help to create the nest and care for young. The female lays 2-4 eggs that are incubated for 24-28 days. Chicks fledge at 42-50 days; at this point they are completely feathered but will not acquire adult plumage until seven years of age.

Waldrapp ibis are listed as critically endangered by the IUCN; in fact, they are among the world’s most endangered avian species. Once common across central Europe, northern Africa and the Middle East, they are now isolated to sites where only about 420 wild birds remain. Waldrapp ibis are threatened by habitat loss as a result of wetland drainage and the creation of dams. Additionally, uncontrolled hunting, pesticides and climate change contribute to their population decline.

Thanks to an internationally coordinated Species Survival Plan, in which San Francisco Zoo participates, there are over 1,100 waldrapp ibis in captivity. Offspring from zoos have even been released back to the wild, so that some colonies in Turkey consist entirely of captive-hatched ibis.

What can you do to help Waldrapp ibis?