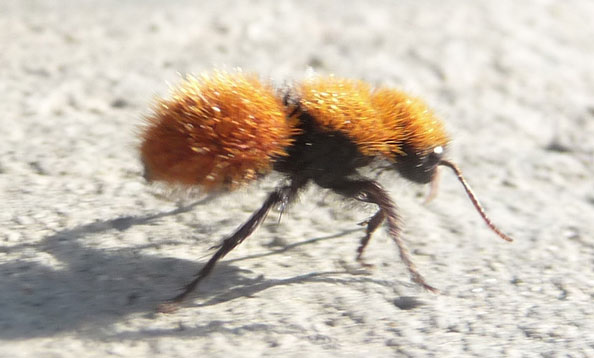 The exoskeleton of all velvet ants is unusually tough. This characteristic allows them to successfully invade the nests of their prey and also helps them retain moisture. Velvet ants range in size from 1/8 inch to one inch. Red, orange, yellow, black or white bristle-like hairs, known as setae, cover the entire body. Males have wings but no stingers, while females have stingers but lack wings.

Over 150 species of velvet ants occur throughout the United States, southern Canada and Mexico, although this is a rough number. They live in all parts of the desert from hot and dry to semiarid areas to scrublands.

Nectar is their preferred food.

Velvet ants are active during the day, and they may be some of the first insects to hit the trail in the morning and last to settle in for the night. They retreat from high ground temperatures in the middle of the day by burrowing under debris or climbing into plants.

They are especially common.

The velvet ant can be found in the Insect Zoo.