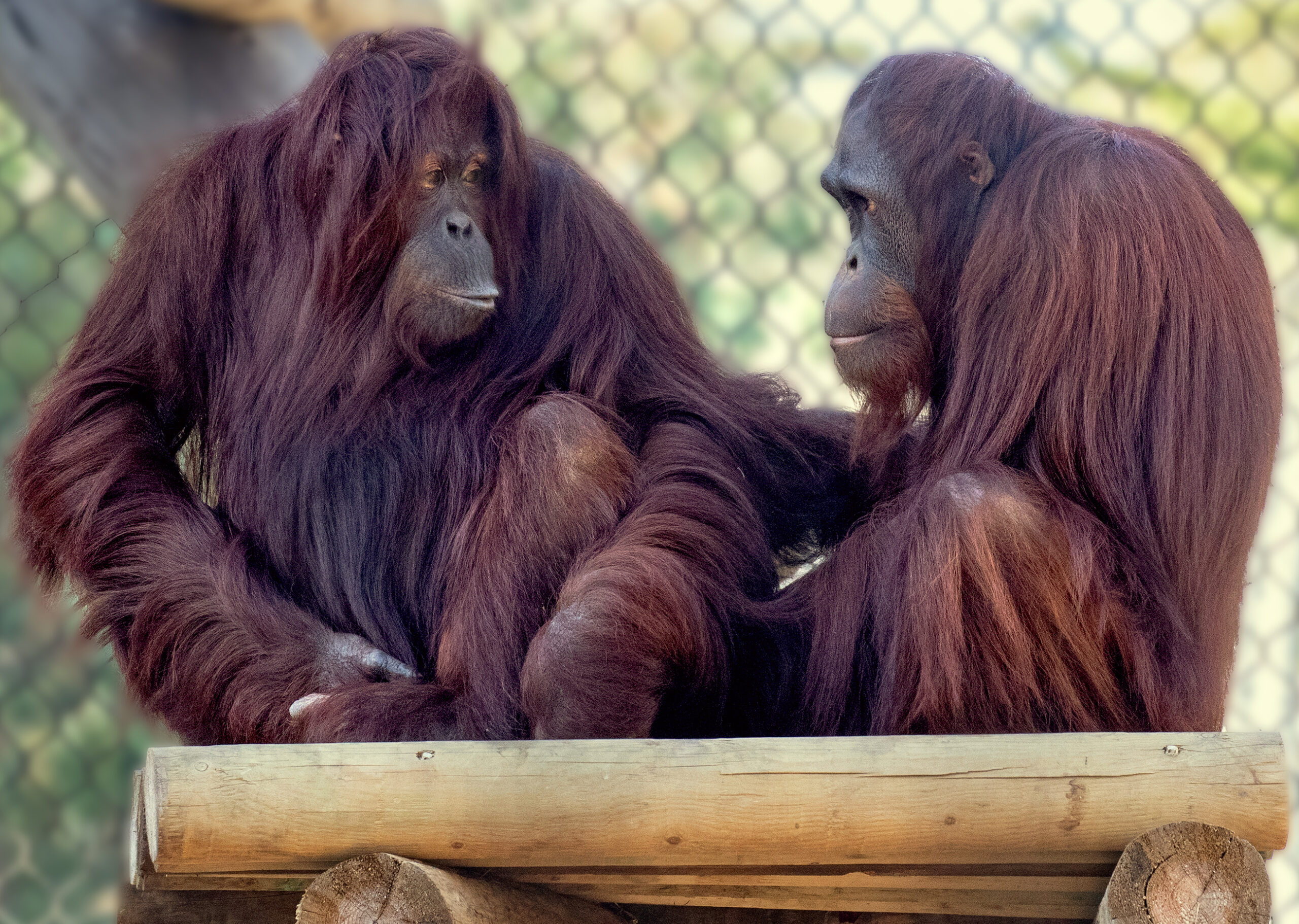 You can find the orangutans at the Great Ape Passage in the area once referred to as the Triple Grotto. It has housed many primates over the years. Triple Grotto was conceived in the late 1950s as a state-of- the-art playground and habitat for our orangutans and chimpanzees. The 2019 expansion, known as the Great Ape Passage exhibit, provides the orangutans with access to overhead passages and additional outdoor space.

Some males exhibit what is known as “bimaturism”, which is two forms of adulthood. Until they are between 15 – 20 years of age, adult males in the wild look similar to adult females and are known as “unflanged” males. As they mature, some males become bigger and start to grow “flanges”, which are large cheek pads. There are some males who are fully mature yet never become fully “flanged”. The unflanged males are smaller than the flanged males and do reproduce. Scientists aren’t entirely sure why some males become flanged and others don’t, but it might be to avoid competition. A flanged male can grow to almost twice the size of an adult female: approximately 38 inches tall and 190 pounds to her 30 inches tall and 80 pounds. Both males and females are covered in shaggy red-brown hair and have long arms relative to body size, which they use to move through the trees or “brachiate”. Males can have an armspan of 7 ½ feet. They have grasping hands and feet to better suit their arboreal lifestyle, as they rarely come down to the ground.

Bornean orangutans are found primarily in lowland tropical forests in parts of Malaysian and Indonesian Borneo.

Orangutans are the least social of the great apes. Adult males spend most of their time alone and females will sometimes join a loose group when a large amount of ripe fruit becomes available. A flanged male will establish a territory that will encompass several females’ territories. The gestation period is 9 months, after which a single offspring is born. The male has no parental role. The offspring will stay with its mother for approximately 8 years, after which she will breed again. Young females will establish a territory next to their mother’s territory. Orangutans live 35 – 45 years in the wild and can live to almost 60 under human care.

Borean Orangutans are listed as critically endangered by the IUCN. Orangutans are threatened by habitat degradation, habitat destruction and habitat fragmentation. As they cannot swim, they can become increasingly isolated in smaller and smaller patches of forest as palm oil plantations replace forest habitat. They are also threatened by the pet trade. The only predator of adult orangutans is humans.

What can you do to help orangutans?