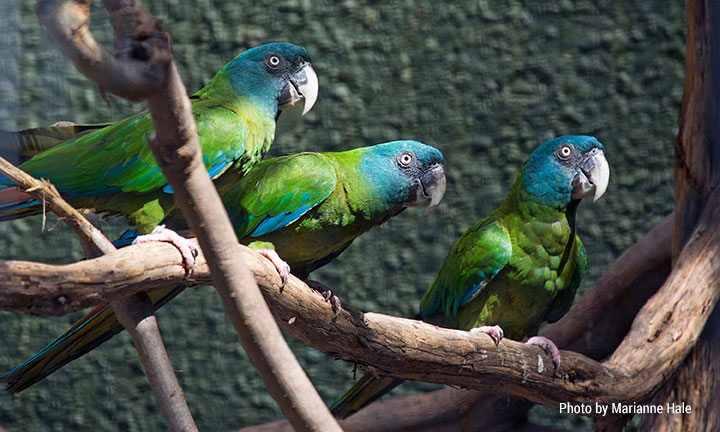 The blue-headed macaw is 16 inches in length, with the large powerful beak and long pointed tail characteristic to all macaws. They have a blue head, green wings and body, with maroon on the upper portion of the tail.

These birds are found in the southwest Amazon and adjacent east Andean foothills of Peru, Bolivia, and Brazil. They prefer humid evergreen forests found along rivers and in clearings from lowlands up to 5100 ft. They are arboreal, diurnal, and herbivorous.

The blue-headed macaw is not usually found in flocks like other parrots, but is instead typically seen in groups of 2-4 individuals. Their call is higher-pitched and softer than that of most other macaws.

This species is listed as Vulnerable due to pressure on their small population from exploitation for the pet trade and deforestation from the logging industry and mining/drilling for gas.

Current conservation efforts are on protecting wild areas where they live.