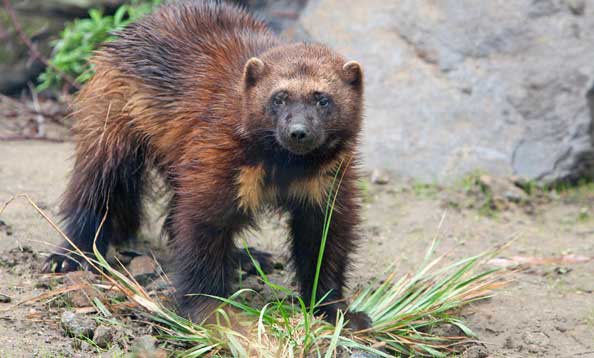 You can find our wolverines near the Pachyderm Building, across from Puente al Sur.

With thick fur and large paws, wolverines are well adapted for living in a cold environment. They are about 25 – 34 inches long and can weigh between 24 – 40 pounds; males can be significantly larger than females. They are stocky and muscular with a broad, rounded head, small eyes, and short rounded ears. Their short legs and wide five-toed paws help them move through deep snow. Wolverines have a keen sense of smell but poor eyesight. They have very powerful jaws capable of crushing bones and tearing frozen meat.

Their fur is brownish-black with a pale stripe down the sides and across the rump and sometimes white markings on the chest. Each animal has a unique coloration so researchers are able to identify individuals by their coat pattern.

They are found in boreal forests, taiga, alpine, and tundra habitats of northern Europe and Asia, Canada, and Alaska. Wolverines are found in areas with cold climates and prefer areas with low human populations.

Wolverines are omnivores and have a varied diet that changes based on availability. For instance, in the summer they might eat berries, eggs, and plant matter, but throughout the year their diet primarily includes meat. They actively hunt animals such as squirrels, rabbits, birds, and injured or weakened deer and moose. Wolverines are such tenacious predators they can take down prey many times their own size, especially if the prey gets stuck in the snow. They are extremely opportunistic eaters regularly eating carrion and have even been seen scavenging whales, seals, and walrus.

Wolverines are solitary and very territorial, marking their range using their scent glands. Males have large territories and will fiercely defend that area against other males. They will also mark food, decreasing the likelihood that other animals will steal it. Female’s territories do not overlap but a male might share a territory with several females. Wolverines do not hibernate; instead they spend the winter traveling several miles a day in search of food.

Females build a den in caves or under snow and will give birth to an average of three cubs.

Breeding occurs in the summer but wolverines delay implantation so that cubs are born in late winter or early spring. Young are born small and helpless after a gestation period of only 30 – 50 days. They will stay with their mother for up to two years before leaving to establish their own territory.

As adults, wolverines have few natural predators but wolves, bears, and eagles can be threats to young wolverines.

Wolverines are listed as least concern by the IUCN. They require large territories which often brings them into conflict with human development. Hunting and trapping have reduced their numbers so that they occur in only a small portion of their former range. Wolverines’ thick fur was once prized to make clothing but this is not a significant threat today as they are protected throughout much of their range.