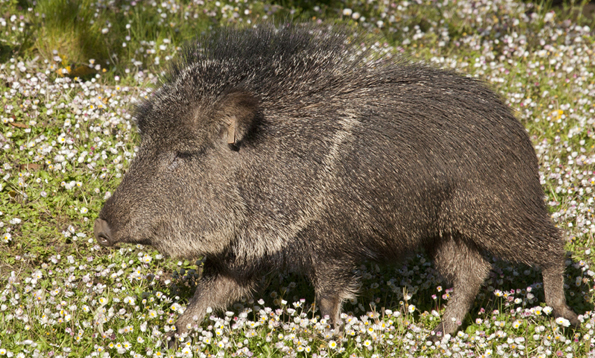 The Zoo’s Chacoan peccaries can be found in a large outdoor habitat between Lower Lake and The Station Cafe.

Chacoan peccary have a bristly brown and grey coat, which helps them blend in and protects them from the thorny brush and succulents of their habitat. They have long ears and a large head with a large tough snout provides a keen sense of hearing and smell. The legs are relatively long and adapted for running, with dew claws only on the forelegs but the relatively small feet help the peccary to move around the thorny plants of their habitat. Nasal chambers and sinuses are well-developed, possibly an adaptation to the dusty conditions found during much of the year in the Chaco.

Lifespan in the wild is about 9 years; under human care, peccary can live up to 18 years.

Chacoan peccary live in the Gran Chaco, a hot, semi-arid plain in Paraguay which extends into Bolivia and Argentina. Vegetation primarily consists of low-lying succulents and thorny bushes.

Peccaries use their tough snout to roll cacti on the ground knocking spines off cactus and digging up roots that provide nutrients and water. They may also pull off the spines with their teeth and spit them out. They are non-ruminating with a two-chambered stomach that is specialized to digest cacti and specialized kidneys to break down acid from the cacti and secrete concentrated urine to conserve additional water. Peccaries get most of their water from their diet.

Peccaries are active mostly during the day and live in small groups from two to ten animals. Groups are a mix of males and females and their dependent young, with no dominance hierarchy. These social mammals communicate by various sounds ranging from grunts to teeth chatters.

They are generally not aggressive but individuals may occasionally exhibit aggressive behavior like charging and biting. They use scent marking to maintain territories and communicate with other peccary groups. As a defensive strategy, members of a herd may line up in a defensive wall.

Females give birth about once per year after a gestation period of 151 days. Litters are usually between one and four well-developed young which are able to run shortly after birth.

The Chacoan peccary is listed as endangered by the IUCN. Chacoan peccary herds are decreasing as a result of habitat loss and fragmentation due primarily to increase in the number of ranches, oil exploration, road construction and uncontrolled hunting.

The AZA has a Species Survival Plan for the Chacoan peccary. The SSP helps to manage the breeding and transfer of Chacoan peccaries within accredited institutions for the health and welfare of the species and to work to keep it from extinction. The Chacoan peccary is an endangered species found only in an endangered habitat, the Gran Chaco of South America. Since 1980, the AZA captive breeding program coupled with AZA funded conservation management at Proyecto Tagua in Paraguay represent the only efforts to protect this mammal in nature and in captivity.

What can you do to help Chacoan peccaries?