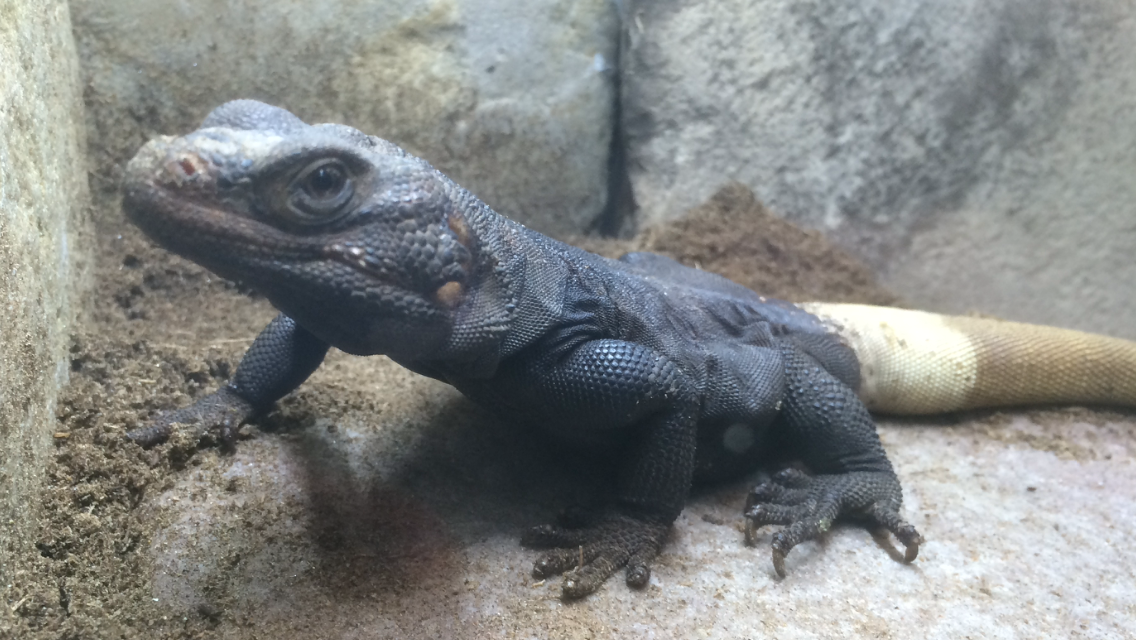 You can find the chuckwalla in the windows of the Animal Resource Center.

Male chuckwallas are slightly larger than females. Adults reach lengths over 15 inches, half of which is made up of tail. Their tails are thick at the base and taper at the end. Females have a slightly narrower head and snout. Color variation depends on temperature, geographic location, surroundings and mood. The colors of a chuckwalla help it to camouflage and blend in with its surroundings.

The average lifespan in the wild is 15 years; the oldest known chuckwalla under human care lived to be 65 years old.

They live in rocky desert habitat with plenty of crevices and places to hide and enough vegetation to eat. Chuckwallas are found in southeastern California, southern Nevada, southwestern Utah, western Arizona, and northwestern Mexico around the Gulf of California. They are found from sea level up to 4,500 feet.

They feed on leaves and fruit of the desert creosote bush, browneyes, ragweed, other vegetation and the occasional insect. They get the water that they need from the food that they eat.

Predators of chuckwallas include rattlesnakes, coyotes, kestrels and red-tailed hawks. When threatened, a chuckwalla will hide in its burrow, inflate its lungs and expand its skin, effectively wedging itself into place.

Chuckwallas are solitary with the exception of breeding season. Mating takes place in the spring, after hibernation, and males will use head-bobbing, licking, nudging and jaw-rubbing to entice females to mate. Males will compete for the right to mate with females by biting and head-butting each other. A clutch of 5 – 16 eggs is laid in an underground nest, which the female will incubate. Once hatched, there is no parental care. Chuckwallas are diurnal, spending the day near their burrows either basking in the sun or searching for food.

Chuckwallas are listed as Least Concern by IUCN. Threats to chuckwallas include habitat destruction and degradation, as well as collection for the pet trade.