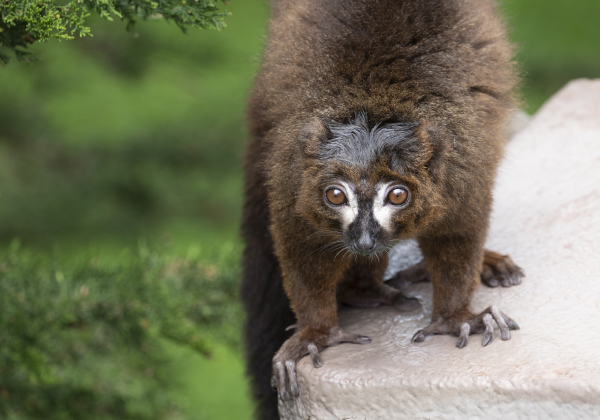 The Lipman Family Lemur Forest features seven species of lemur, among them is the red-bellied lemur. This lushly forested habitat features an elevated boardwalk to provide guests with exciting viewing perspectives of these lively primates.

Like many lemurs, this species exhibits a degree of sexual dimorphism. Male red-bellied lemurs are predominately chestnut-brown with white teardrop-shaped eye patches. Males also have denser cheek hairs, a black muzzle and often have a greasy appearance due to their scent gland secretions. Females are lighter brown with creamy bellies and dark eye patches.

Red-belied lemurs are medium sized, weighing about four to five pounds. They have a semi-opposable thumb and a grooming claw on the second digit of the hind foot.

Lifespan is about 20-25 years in the wild and longer under human care.

This species of lemur is thinly distributed in medium to high altitude rainforests in eastern Madagascar.

They are considered frugivores but will also consume the flowers and leaves of over 60 identified plant species. They also eat some invertebrates such as millipedes.

Red-bellied lemurs are intermittently active throughout the day, resting between periods of foraging. They live in small family groups of two to six individuals, usually consisting of an adult pair and their offspring. Groups are matriarchal so females lead the group in foraging, have first access to food and choose their own mate. This species is quite territorial and will actively defend their home range. Lower incisor teeth are used to groom other group members, which helps maintain social connections.

To defend against predators, one red-bellied lemur will act as a sentinel when the group is feeding. The sentinel will utter several low grunts to alert the group of danger, causing them to either freeze for several minutes or take cover among foliage.

Mating is seasonal, occurring from May through July. Single young are born in September and October, which is when fruit is most available. For the first two weeks, the mother carries and nurses the infant then both parents care for it equally. After about five weeks, the mother often rejects the baby and the father takes care of the infant until it is about 100 days old. The offspring are ejected from the group when they reach maturity, around 3 years of age.

Red-bellied lemurs are listed as vulnerable by the IUCN. The major threat to their survival is habitat loss due to slash-and-burn agriculture and illegal logging. Poaching for the bushmeat trade is also a threat as human populations increase on Madagascar.