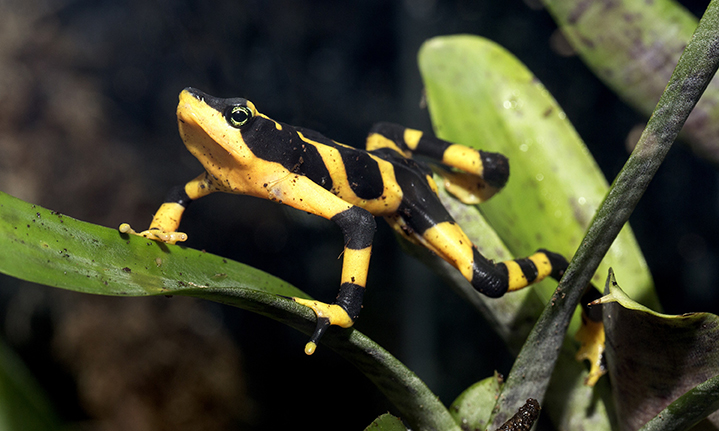 Panamanian golden frogs are technically toads, despite their name. Tadpoles are brown or grey, while adults have very bright colors ranging from deep yellow to orange or even yellowish-green. They often have black dorsal stripes or spots, but some lack these distinct markings. Males and females have similar coloring as adults, but females are much larger. Golden frogs in dry habitats are substantially smaller than those in wet ones. As a species they range from 1.5 to 2.5 inches in size.

The Panamanian golden frog is terrestrial and diurnal, living in montane forests, with breeding and larval development taking place in forest streams. They are endemic to central Panama.They primarily eat small invertebrates such as ants, beetles, flies, wasps, silverfish, springtails, spiders and caterpillars.

Males remain at streambeds year-round, staking claim to potential breeding grounds, while females spend the majority of the year in the forests, only returning to the streams during breeding season. Panamanian golden frogs vocalize with “chirping” and trills, but lack eardrums. It is hypothesized that they sense these vocalizations with their lungs, which vibrate when sound waves hit them. In addition, they communicate using semaphore (visual signals) by waving their hands and feet, most likely due to the loud stream currents. Males use hand-waving to ward off rivals and attract females, while females wave at approaching males to scare off any less courageous mates. Successful males ride females while she finds a good spot to lay her eggs, sometime for days to weeks. Females lay a looped string of eggs and attach it to a boulder or root in the stream, and males fertilize them afterwards. Tadpoles emerge within 9 – 11 days.

Critically Endangered – IUCN 2010. Populations have dropped by 80% over the last ten years, most likely due to the chytridiomycosis fungus.

Project Golden Frog is an organization that strives to ensure the survival of this culturally significant species. It is an international conservation consortium of Panamanian and American institutions working together to increase public awareness of global threats to amphibians as a whole, bring greater understanding of the need for land preservation, and foster coordinated efforts between government and conservation organizations to help bring this and other amphibian species back to the wild.