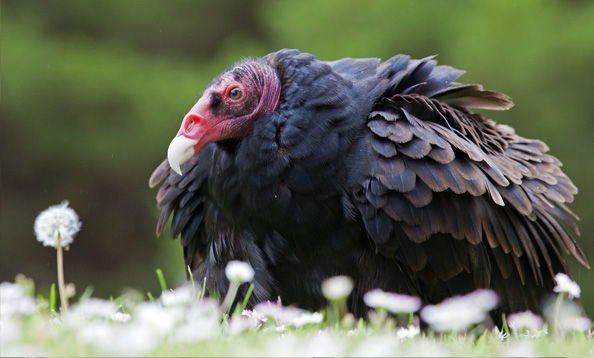 Our turkey vulture resides in the Koret Animal Resource Center.

Turkey vultures are large birds, with a wingspan of up to 3 feet and weight of 2 to 4.5 pounds. They have long, broad wings with finger-like feathers extending from the tips; these are especially evident during flight. The body is mostly brownish-black, but the flight feathers on the wings are paler beneath. Their head is small in proportion to the body; in adults the head and neck are red in color with few to no feathers. It also has a relatively short, hooked, ivory-colored beak.

Both male and female appear similar in color and size. Juvenile turkey vultures lack the characteristic red head and neck; instead they have grayish skin and downy feathers.

Lifespan is about 10 years in the wild.

This species has an extremely large range covering southern Canada through Central and South America to southern Chile. The turkey vulture is found in open country, varying types of forests, shrublands, deserts, pastures, grasslands, mountains and wetlands. It is most commonly found in relatively open areas which provide nearby woods for nesting. It generally avoids heavily forested areas, although they can be found in dense tropical forest in South America.

Surprisingly, these vultures have an incredible sense of smell which helps them to locate food. They feed primarily on carrion, preferring the carcasses of recently dead animals. While these birds tend to favor various sized mammals they will also eat reptiles, amphibians, other birds, fish, live insects and other invertebrates.

The turkey vulture is gregarious and often seen roosting in large numbers, from a few dozen to several hundred. During the day these birds break away to search for food independently or in small groups. Birds living in the northern parts of their range will migrate long distances to areas in Central and South America.

The turkey vulture is awkward on the ground with an ungainly, hopping walk. It requires a great deal of effort to take flight, flapping its wings while pushing off the ground and hopping with its feet. They are generally quiet birds but will grunt and hiss when threatened.

Breeding season varies depending on the location but in North America it occurs from March to June. Nests are simple scrapes in dirt made in rock crevices and ledges, shallow caves, and on tree stumps in a secluded location. Courtship includes a behavior called “follow flight” where males and females take turns soaring after one another. Females lay 1-3 eggs that are incubated by the pair for 28-40 days. Chicks fledge at 9-10 weeks and are independent at 80-90 days.