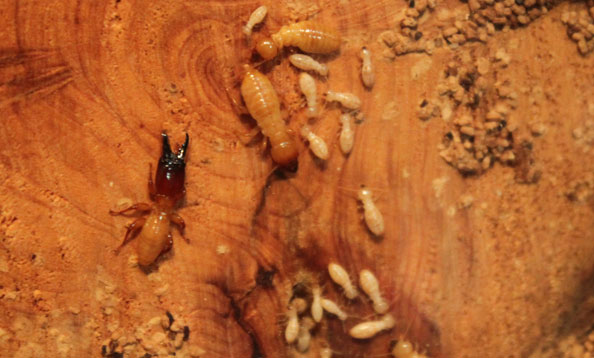 Dampwood termites are much larger then the subterranean termites that are common across the US. These termites are about 1/2″ to 5/8″ in size. They are long, narrow and oval shaped and are brownish in color. They have a large head with mandibles (pincers) on the front. The swarmers (winged termites) can be 1” long including their wings.

Because they need lots of moisture, Dampwood Termites usually live in damp, dying wood or in houses with leaking plumbing that keeps the wood wet. Dampwood termites like to live and feed in very moist wood.

There are no dampwood termite workers. The immature termites do the work in the colony. They do not make tunnels like the subterranean termites. Wood that dampwood termites have damaged usually looks clean and smooth inside. They often eat across the grain, especially in wood that is decayed. The dampwood termites sometimes use their fecal pellets to seal the galleries where they live from the outside air.

Dampwood termites are common and are not endangered.