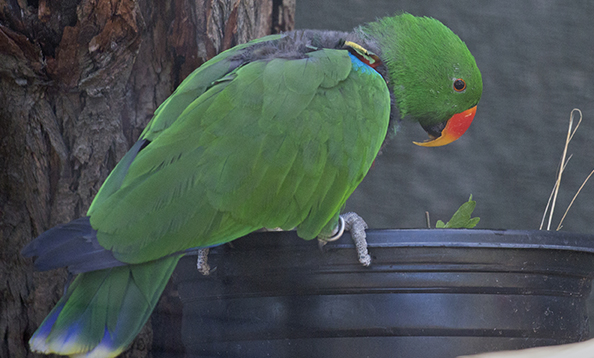 You can find the Eclectus parrots across from Koala Crossing by the California Conservation Corridor.

Eclectus parrots are approximately 14 inches in length. Males and females are the most sexually dimorphic of the parrot species, with extremely different coloring. Males are mostly bright green with yellowish feathers on the head, blue under the tail and underside of the wings, and red on the sides. Males have a orangish-yellow beak. Females are mostly bright red, with blue or purple feathers under the wings and on the belly. Females have black beaks. A lifespan of up to 40 years has been recorded.

Eclectus parrots are found mainly in forests, and also shrub lands and grasslands. The red-sided Eclectus inhabits the lowland coastal rainforest of mainland New Guinea. It also inhabits the mainland of the highland valley floors such as the Wau Valley as well as the western Papuan Islands.

They feed mostly on fruits, and also nuts, buds, and seeds.

Female eclectus parrots establish a nest in the hollow of a tree. The female will stay in the nest and males will bring her food in hopes of winning the right to breed. Eclectus parrots are polygynandrous, which means that females will mate with multiple males. Two eggs are laid and incubated for 28 – 30 days. Chicks will fledge around 11 weeks and will reach sexual maturity in 2 – 3 years. Females with poor nest location have been recorded committing infanticide. Scientists have theorized that the breeding behavior could account for the extreme differentiation in color between males and females. As the males spend the most time in the forest, it is best for them to blend in with the greens of the canopy; as females need to attract the males, their bright red coloring can be seen outside the nest hollow, but is a dark enough color for camouflage once inside the nest cavity.

The red-sided Eclectus is the most numerous subspecies and has the most extensive range in the wild.