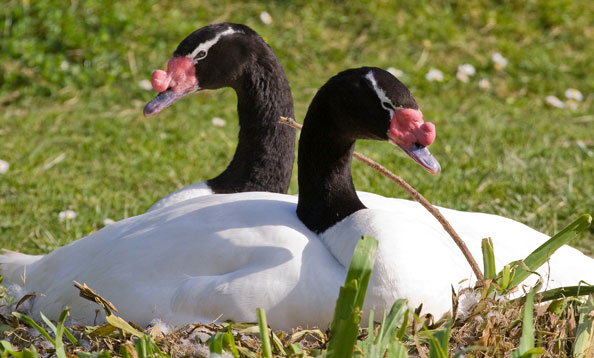 You can find the black swans at Puente al Sur, a multi-species exhibit located on the north side of the Zoo near the Little Puffer steam train depot.

These birds are named for their characteristic black neck and head that contrasts a large white body. The swan’s particularly long neck allows it to exploit great depths; this makes it possible for swans to access food left untouched by other waterfowl. Black-necked swans have a white stripe extending from the eye toward the back of the head. Their beak is grayish and topped with a red knob, called a caruncle, at the base.

Juveniles lack the knob on the bill and have a grey and brown flecked body with a blackish-brown head and neck.

Black-necked swans are found throughout the southern tip of South America including southern Brazil, Chile, Paraguay, Bolivia and the Falkland Islands. They inhabit swamps, lagoons, marshes and lakes in both saltwater and freshwater habitats.

Black-necked swans are usually monogamous and can mate for life. They are social birds but become quite territorial and aggressive during breeding season.

Breeding season occurs from July to November; afterwards, partially floating nests are built in reedbeds near the water’s edge. A clutch of 4-8 creamy colored eggs are laid and incubated by the female for 36 days. Chicks, called cygnets, are covered with grayish-white down when they hatch. Females lose much of their body weight while brooding so after hatching takes place males care for chicks while females feed. Fledging takes about 100 days, although chicks stay with parents for up to a year.

Black-necked swans are listed as least concern by the IUCN. While it was eradicated in some parts of its range, it has colonized new areas thanks in part to protection from hunting. Drainage of wetland habitat continues to be a problem for this species, but the global population was estimated at approximately 26,000-100,000 individuals in 2002.