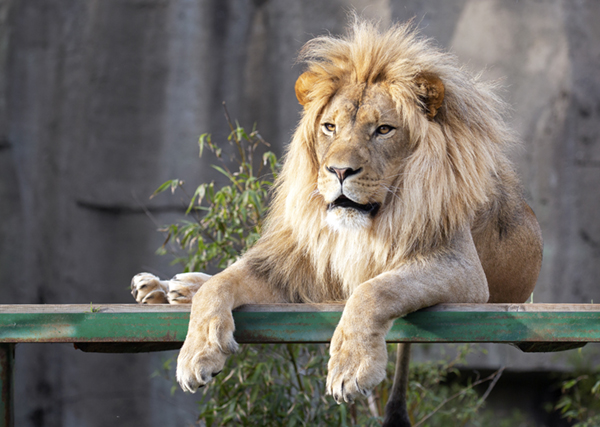 You can look for our lions in one of the big cat grottoes in Cat Kingdom. Lions sleep for as many as 20 hours a day, so don’t be surprised if you find them resting!

Male lions weigh between 330 and 550 pounds, while female lions weigh from 265 to 395 pounds. Their head to body length ranges from 4.6 to 6.3 feet with a tail length around 3 feet. A lion coat is light tawny yellow or buff with a white belly. The male has a mane that varies in color from light tawny to dark brown to black and acts as protection during a fight. Lions’ coloration provides excellent camouflage in grassy plains and scrub country.
Lions have 9 distinct vocalizations. The roar can be heard at a distance of 5 miles and is usually heard at sundown, after a kill and after eating. The remaining sounds have not been interpreted, but appear to having meaning within the pride.

In the wild, lions eat wildebeests, zebras, buffalo, gazelles, wart hogs and other ungulates that may overlap its territory. If large game is scarce, they will eat small game, carrion and even domestic livestock. At the Zoo, the lions are fed a diet of fortified horsemeat, chicken and rabbits.

In late 2015, the United States Fish and Wildlife Service added lions to the Endangered Species Act. The lion is listed as Vulnerable by the IUCN but its population is rapidly declining due to loss of habitat, sport hunting and poisoning to protect livestock interests. Human settlement is a major factor contributing to habitat loss and depletion of wild prey. Fortunately, lions are present in a number of protected parks where their numbers can be closely monitored. Additionally, these magnificent cats are vital to local eco-tourism which provides incentive to support lion conservation.