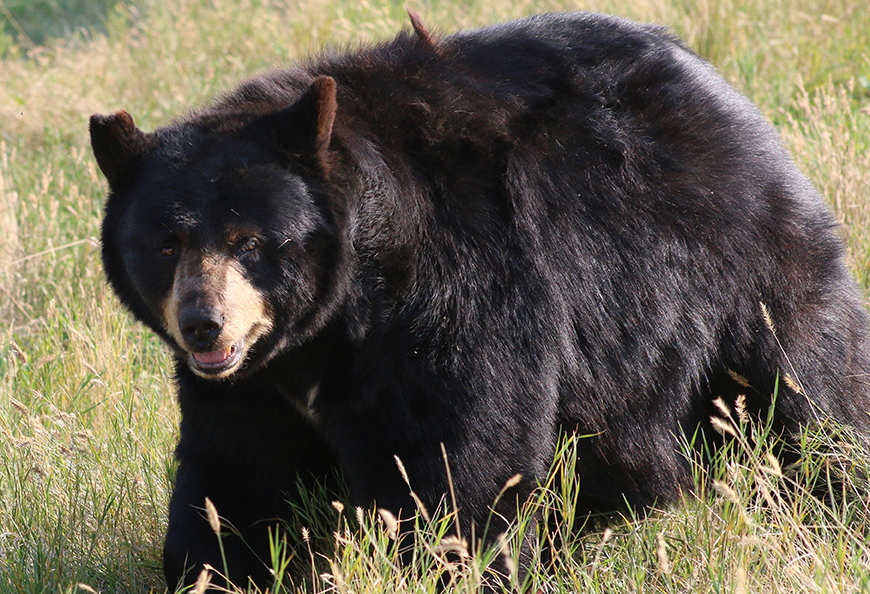 You can find our two black bears in Bear Country to the left of Wolf Canyon.

The name “black bear” is somewhat of a misnomer, as these bears can come in a wide variety of colors from light brown to cinnamon to grey. Some of these coat variations are regional, but cubs of the same litter can range in coat color. American black bears are differentiated from brown bears by the shape of their head, which slopes in a straight line from their brow to their nose. They also lack the distinctive shoulder hump of a brown bear and have shorter claws more suitable for climbing. They are excellent climbers, as well as being fast runners and capable swimmers. Males weigh between 130 – 500 pounds, while females are slightly smaller, weighing between 90 – 330 pounds.

Their lifespan is approximately 25 years.

American black bears inhabit a wide variety of forests, including open woodland, scrub forest, swampland and temperate rainforest, from sea level up to 11,000 feet. They are found in Canada, forested parts of the United States, and northern Mexico.

They are opportunistic omnivores and will feed on a wide variety of food, including nuts, berries, roots, fruits, insects, eggs, fish, mammals, and carrion. In areas near human habitation they will also feed on items associated with humans, such as garbage, birdseed, and crops.

American black bears are active mostly at night, but can also be active during the daytime. They can have large home ranges and are mainly solitary, except during the breeding season, when they can become territorial. Groups can form around large food sources.

Breeding takes place in June or July and the implantation of the embryo is delayed. The embryo then implants itself in the womb in November and a litter of up to six cubs will be born in January, while the mother is denned. In the northern part of its range, black bears will hibernate, while in the southern part of its range it may hibernate for a shorter period of time or not at all. Mothers will den to give birth regardless if they are hibernating or not. Cubs are weaned between 6 – 8 months old and will remain with their mother for a further 9 months after weaning, spending a second winter hibernation together. Females reach sexual maturity at 4 – 5 years and males later than that.

What can you do to help black bears and camp safely in their habitat?