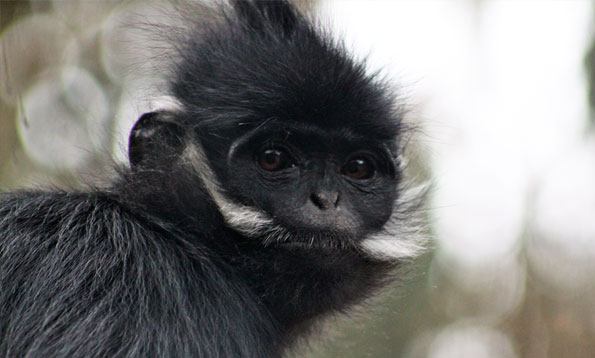 The Zoo’s group of François’ langurs can be found adjacent to Gail’s Fragrance Garden near the mandrill habitat.

François’ langurs are a smallish monkey weighing about 13 pounds, with a very slender body. The tail is also long and thin, measuring about three feet in length. These langurs are characterized by a long pointed crest and fine black fur except for a white band from the angle of the mouth across the cheeks to the ears. François’ langurs are known for the inquisitive expression created by the prominent brow ridge, which resemble raised eyebrows.

Langurs lack cheek pouches like other monkeys but have enlarged salivary glands and a two-chambered stomach with specialized bacteria to help break down leaves.

Newborns are reddish-orange, but occasionally may also be white or brown. This bright coloration makes it one of the easiest to spot of any primate infant and may help encourage females of the group to care for their young. This color changes quickly and reaches black by one year of age.

François’ langurs are found in Southeast Asia from southeastern China to central Laos and northern Vietnam. They prefer moist forests or well-sheltered rocky areas, depending on the season.

In the wild, they eat a diet made up largely of leaves, as well as fruit, flowers and cultivated crops. At the Zoo, the François group is fed a diet of leaves, fruit and monkey chow.

François’ langurs typically live in small family groups consisting of one adult male, several females and their offspring. Females lead groups that usually include 12 individuals but can range from 4-27. The François are mostly arboreal but will spend some time on the ground foraging and moving from tree to tree. As leaf eating monkeys, long periods of rest between feedings are required for the lengthy digestive process.

Mating occurs throughout the year, but peaks in autumn and winter. A female delivers a single offspring after a six to seven month gestational period. The female and her new infant are the center of attention and all females take an active interest in the care of the infant. The infant is often released to a related female for babysitting intervals around the third week of life, while the mother forages for food. Young are weaned at around two years; at about three or four years old juvenile males will leave the group and form bachelor groups or join another family group.

François’ langurs are listed as Endangered by the IUCN. There is reason to believe the species has declined by at least 50% over the past 36 years due primarily to habitat loss and hunting. Throughout the Guangxi province in China the threat of hunting is extremely severe, due to the illegal production of “black ape wine”, a product made specifically from this species.

The San Francisco Zoo has a successful breeding program coordinated by the AZA’s Langur Species Survival Plan. The most recent birth occurred in September 2019.

What can you do to help François’ langurs?