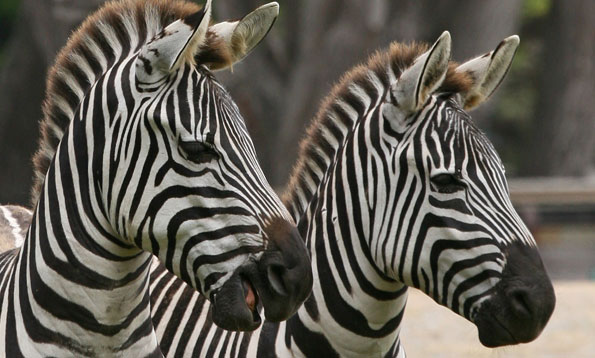 You can find our zebra roaming in the Leanne B. Roberts African Savanna.

The zebra looks very much like a horse, although the mane is short and stands upright, and the body is stockier and relatively short-legged. Both males and females can weigh up to 800 pounds and stand 56 inches at the shoulder. The distinctive black and white stripes make the zebra difficult to see in the light and shadow patterns of the grasslands. Stripes might also aid in temperature regulation and identification within the herd. Compared to other zebra subspecies the Grant’s zebra has relatively thick stripes that meet at the belly and continue on the legs.

They have well developed sense of smell, hearing and vision in order to avoid predators and can run up to 40 miles per hour.

Grant’s zebra can be found in the grasslands, savannas and open country of Africa, including Southern Sudan and Ethiopia, and south to central Angola and eastern South Africa.

They prefer tall coarse grasses which, when removed, expose the shorter, more succulent blades preferred by wildebeest and gazelle. At the Zoo, the zebras are fed a diet of hay, grain and browse.

Within each herd, cohesive family sub-groups are composed of one stallion, several mares and young. Mares normally stay in the same family group for their lifetime. Often a group of 10 or 12 share a home range with wildebeest and ostrich. Surplus males may form bachelor herds; when these zebras reach their fifth or six year, they try to “kidnap” females to form an independent family.

Lions are the most successful predators, preying chiefly on young, ill or aging zebras. When threatened, the herd will often form a circle around the most vulnerable members. Stallions may fend off lions or hyenas with kicks and butts, but commonly direct these efforts to challenging males. Stallions will fight for control of a harem of mares. No permanent bond exists between any two adult animals.

Single offspring are born after a gestation period of 360-396 days. Births can occur at any time during the year, although many births occur in the wet season. Foals weigh from 66-77 lbs, are striped brown and cream, and can stand and nurse very soon after birth.

Grant’s zebras are listed as least concern by the IUCN. They are widespread and are not currently facing any serious threats; however, some localized populations have declined due to habitat loss, hunting and competition with domestic livestock. Fortunately, this species is able to quickly recover from population loss, especially in protected areas.