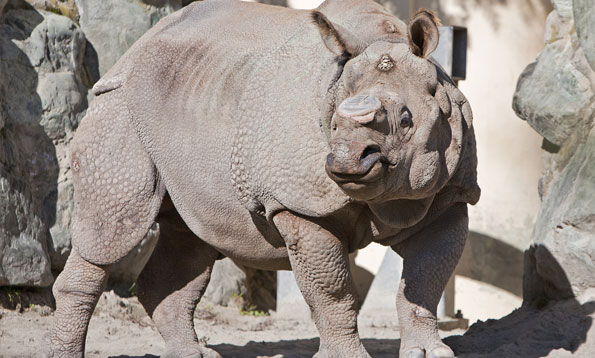 Our greater one-horned rhinoceros, Gauhati, can be found across from Penguin Island at the back side of the Pachyderm Building.

Gauhati wears down his horn on his own by rubbing it on the rocks in his enclosure but sometimes he needs help keeping it even. Our pachyderm specialists and veterinary staff work with Gauhati to file and trim his horn to keep it growing and healthy.

The greater one-horned rhino is the largest land mammal after elephants, along with the African white rhino. Males can weigh up to 6,000 pounds and females up to 3,500 pounds. These rhinos are characterized by grey or grayish-brown skin folds that resemble armor plating and have wart-like bumps that cover the shoulder and upper leg region. They have a single horn that sits on a bony knob and is composed of hardened, compressed hair-like fibers called keratin.

Indian rhinos have a prehensile upper lip that is flexible and is used to grasp bunches of grass in a browsing motion or can be tucked out of the way for grazing short grasses. Their excellent sense of smell and hearing gives rhinos information about their surroundings and help them detect danger. Rhinos have poor vision though, and are extremely near-sighted, making them very dangerous and unpredictable and likely to charge unfamiliar sounds and smells.

Lifespan is between 30 and 40 years in the wild and up to 47 years under human care.

They are herbivores and grazers. In the wild, they primarily forage on tall, reedy grasses, but also eat small amounts of aquatic plants, bushes, tree twigs and sprouts. At the Zoo, the Indian rhino is fed a diet of grain, hay, fruits, vegetables, and acacia.

The Indian rhino is usually solitary except for females with young. Territories are not strictly enforced and generally a short grunting charge is enough to settle a conflict. Occasionally fights do occur and serious wounds can be inflicted by their sharp lower incisors.

Rhinos are crepuscular, feeding in open areas during the early morning and early evening hours. During the day they rest and wallow in muddy water. The buoyancy of the water makes it easier to support their huge weight and also protects them from heat, sunburn, parasites, bloodsucking flies and keeps their skin supple.

Urine spraying, foot-dragging tracks and dung heaps are important forms of communication. Rhinos mark their paths by secretions from a gland located above and behind the ball of their foot. Communal dung heaps near wallows and on public paths become enormous and act as an updated directory of animals in the area.

A calf is born after a 16-month gestation period, and will have all the skin-folds of an adult and a smooth plate on its nose where the horn will grow. Newborns gain 4 to 6 pounds daily and remain dependent on their mother for one to two years.

The greater one-horned rhino is listed as vulnerable by the IUCN and are holding their own through intensive conservation and management efforts in Nepal and India. Recent estimations by the World Wildlife Fund number them at around 3,500. Although poaching, poisoning and habitat loss are still serious threats for these rhinos.

Rhino horn has been sold for up to $92,500/kg and is the most sought after horn in the world. Although the use of substitutes for rhino horn is advocated by doctors, pharmacists, and conservationists, many people still insist on using rhino horn as opposed to sustainable materials, such as water buffalo horn, for traditional medicine.

What can you do to help rhinos?