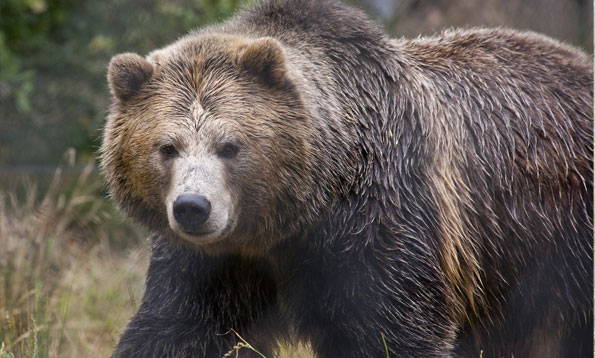 Our two female grizzly bears were orphaned as cubs in Montana and cared for by Montana wildlife officials before being released to the wild. Used to human-induced food rewards, they were considered nuisance animals after getting too close to developed areas and into a rancher’s grain storage. After several attempts to relocate them away from humans and numerous phone calls to find the bears a new home, Montana wildlife officials were forced to make the agonizing decision to euthanize them.

In the fall of 2004, San Francisco Zoological Society Board Member Fred Carroll notified the Zoo of the bears’ dire situation. With the cooperation of the Montana Fish, Wildlife and Parks Department, the Zoo agreed to provide a home for the two grizzly bears, Kachina and Kiona, named in a naming contest held by the Zoo.

You can find our grizzly sisters at Hearst Grizzly Gulch.

Grizzly bears are one of several subspecies of brown bears. They can weigh up to 800 pounds and stand about 7 feet tall. Their fur is typically a shade of brown but can also be blonde or black – often causing some confusion in ranges they share with black bears. The guard hairs on the back are tipped in white, giving them a “grizzled” appearance – hence their name.

They have a characteristic shoulder hump that provides the muscle power to create winter dens, dig up roots, strike down a prey animal or compete with rivals. Grizzlies’ front claws can grow up to four inches long and they have both grinding molars and piercing canine teeth. Grizzlies walk flat-footed but can also stand on the rear legs for a short time. The head is massive with small eyes and ears and a dish-shaped face. Their sense of smell is incredible but hearing and eyesight are quite keen as well.

As omnivores, they eat a variety of plants and berries, insect, fish, carrion, rodents and large mammals.

Grizzlies are solitary except for females with young and gatherings during salmon runs. Females hold exclusive home ranges while a male may overlap several of these ranges. Bears communicate by scent marking on trees and bushes, as well as with their urine and feces.

Dens made in rock caves, hollow trees or dug in the ground are used by all grizzlies for protection and security in winter. Grizzlies enter a dormancy that is triggered by fat store, not cold weather. They are not true hibernators since their body temperature does not drastically lower. Depending on available resources, they can gain around 400 pounds in the fall. In areas with short winter seasons these bears will spend less time in dens; at zoos bears do not hibernate at all.

Breeding occurs from May to July but fertilized eggs only implant when the female is ready to den in October and November. One to three cubs are born tiny and helpless in January or February. They spend the winter and early spring in the den, nursing and growing so that they are ready to leave the den in April. Mothers are extremely protective of cubs making them quite dangerous toward unsuspecting hikers. Females may reproduce once every 3–5 years since they remain with their cubs for up to 3 ½ years.

Grizzly bears are listed as least concern by the IUCN. Between 1800 and 1975, the grizzly bear population in the lower 48 states decreased from more than 50,000 to less than 1,000 due to predatory persecution, hunting for sport, and habitat loss due to deforestation. Today, populations are stable but bears still face these threats as well as ordered euthanasia due to human-bear conflicts.

Grizzly bears, once prevalent in California, have been extinct in this state since the 1920s.

What can you do to help grizzlies and camp safely in their habitat?