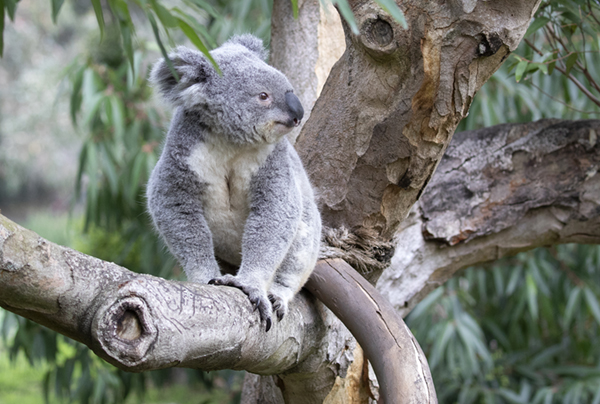 You can see our koalas at Koala Crossing. When the temperature is between 65 and 80 degrees, the koalas may be seen munching eucalyptus leaves and snoozing in the outdoor enclosure. On chilly days, the koalas keep warm in an indoor exhibit, but you can see them through their window habitats.

Koalas are marsupials with dense woolly fur, gray to tawny above and whitish below. The rump is dappled and the ears are large, hairy and fringed in white. The body is compact, and the head is large, with a leathery black nose on a short muzzle. The arms are longer than the legs and the palms and soles are padded. They are typically 25 to 32 inches in length, and weigh between 9 and 30 pounds, northern koalas are smaller than southern koalas though.

Both the koala’s fore foot and hind foot have five digits, all strongly clawed except the first digit on the hind foot, which is short and broad. The hind feet have the second and third digits fused most of the way, forming a grooming claw. On the fore foot, the first two digits are in opposition to the other three fingers, like a thumb, giving a good grip.

The chest of males has a large scent gland which they rub against trees or perches to mark their territory. Females have a pouch opening to the rear and extending up and forward.

Koalas live exclusively in eucalyptus forests in eastern Australia, ranging from Queensland, New South Wales and Victoria, venturing to the ground only to move to another tree.

In the wild, koalas eat the mature leaves of 50 species of eucalyptus, and may also eat mistletoe. At the Zoo, the koalas’ eat a diet of fresh eucalyptus leaves. Although eucalyptus leaves are poisonous to most mammals, koalas’ special stomachs break down the poisonous oils, allowing them to eat 2.5 pounds of leaves a day.

Koalas are mostly solitary, with males and females meeting only during mating season. Males may have several females with them during this time, but do not maintain a harem all year. Males defend their territory at breeding season, producing a powerful scent from the chest gland.

When a koala is born, it is incredibly tiny – about the size and weight of a nickel. Blind and only partially formed, it crawls into the mother’s pouch, where it spends the next six months nursing. Toward the end of pouch life, young feed on partially digested eucalyptus passed through the mother’s digestive tract which prepares their own digestive tract for adult diet. They leave the pouch at about 6 months and ride on the mother’s back.

When vocalizing, males emit a series of harsh inhalations, each followed by a loud, resonant, growling “bellow” expiration. These calls advertise an individual’s presence and warn other males away. The only vocalization commonly heard from females and juvenile males is a harsh wailing distress call, given usually when harassed by adult males.

When a koala isn’t eating, it is usually sleeping – for up to 19 hours per day. Koalas don’t make nests – they simply wrap themselves around a branch or snuggle into the fork of a tree and doze off.

Koalas are currently listed as least concern by the IUCN. After being nearly hunted to extinct earlier in this century, koalas are now fully protected by the Australian government. Although due to large-scale clearing of native forest, many areas of suitable habitat now only occur in small, isolated patches. Other threats include predation by dogs, vehicle strikes, disease, fire and drought.