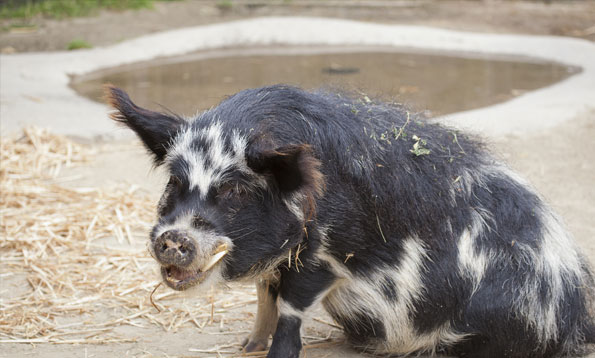 You can find our male KuneKune pig in the Exploration Zone’s Family Farm.

KuneKunes are the smallest of domestic pigs and can vary greatly in appearance. They are found in a variety of colors including black, brown, white, ginger, cream, black and white, as well as ginger and black. They can also have a number of different coat types, from smooth sleek hair to coarse and curly. The coat also varies according to the time of year, sometimes resulting in a marked difference between summer and winter coats. Extensive hair loss in summer is common.

They have short, dished faces, heavy jowls and short, stocky legs. Males weigh between 200-240 pounds while females weigh 120-200 pounds. These pigs can possess fleshy “tassels” called pire pire that hang from its lower jaw and are about 4 cm in length. They serve no apparent purpose and can vary in size from pig to pig. A pig can be born with only one tassel or lose one through fighting or by stepping on it.

Lifespan is about 16 years.

The KuneKune’s ancestors may have come from Asia but they have been found in New Zealand since they were introduced there in the 1800s. They are now completely domesticated and found only in captivity.

They are herbivorous grazers that eat a variety of grasses but do not forage like other pigs. At the Zoo they eat grains and assorted chows.

As a domesticated species they are quite social and thrive with human contact. They are diurnal but will wallow in mud, like other pigs, to keep cool during the hottest part of the day.

Females reach sexual maturity around 10 months and males around a year. Breeding can occur year round. Six to eight piglets are born after a gestational period of about 116 days. Piglets are weaned by four months.

This species is not classified by the IUCN but is considered a rare breed. KuneKune were in danger of extinction in the 1980s due to crossbreeding with other domesticated pigs. Thanks to a successful breeding program that began with a purebred foundation stock of six sows and three boars, more than 3,000 KuneKune pigs are found around the world. Today, due to established breeding programs, their population is stable.