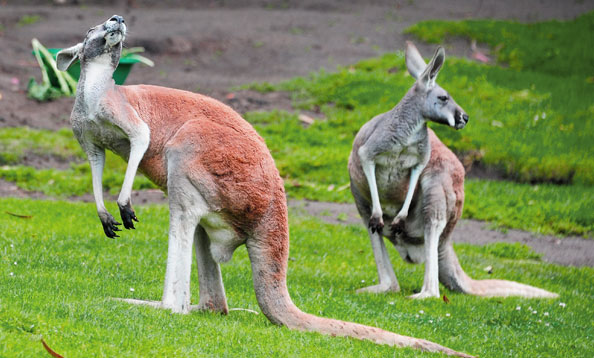 Red kangaroos are the largest living marsupials, with males weighing up to 180 pounds and standing up to five feet tall, while females are much smaller, weighing up to 65 pounds. Male red kangaroos have pale red or brick red back fur, females have a blue-grey fur, and both have white-furred bellies. The coloring closely resembles the red soil of the Australian desert outback, giving them natural camouflage.

Kangaroos have large, muscular legs and a long, tapered tail measuring 35 to 40 inches, almost as long as the rest of the body, which is capable of supporting the animal’s weight. When a kangaroo hops, the tail balances the weight of the body and keeps the animal from falling forward. When seated, the tail acts as a “third leg” for a tripod effect. The kangaroo’s forepaws are small and hand-like, with five digits. A kangaroo will sometimes lick its paws and run them over its fur, just like a cat, which helps it cool off when the weather is hot.

Lifespan in the wild is 9 to 13 years and up to 20 years under human care.

Red kangaroos live in the arid and semi-arid open plains and woodlands of Central Australia.

As grazers, these kangaroos eat a variety of green herbage, grasses and shrubs. Kangaroos get most of the water they need from the food they eat but will travel great distances in search of water. At the Zoo, they eat grasses found in their enclosure, alfalfa, fruit, root vegetables and horse chow.

Red kangaroos are sociable animals, and are often found in small groups of 2-10 individuals, called “mobs.” Groups are typically made of up a dominant male, several females and their offspring. Occasionally, large numbers of kangaroos come together when grasses are plentiful, sometimes numbering as much as 1,500 individuals. They are semi-nomadic and nocturnal, especially in hot weather.

When in danger, kangaroos will beat on the ground with their hind feet. This alarm signal is loud and carries over a long distance. Males kickbox over breeding rights, the two opponents clasping forearms and trying to kick one another in the belly.

Like other newborn marsupials, when a red kangaroo is born, it is incredibly tiny – about the size and weight of a nickel. Blind and only partially formed, the baby must crawl into the mother’s pouch with no assistance at all. There is spends another six or seven months drinking milk, and growing larger and stronger until it is ready to come out into the world. Mother and joey stay together for years.

Red kangaroos are listed as least concern by the IUCN. These animals are relatively abundant throughout their range but are susceptible to habitat destruction and drought.