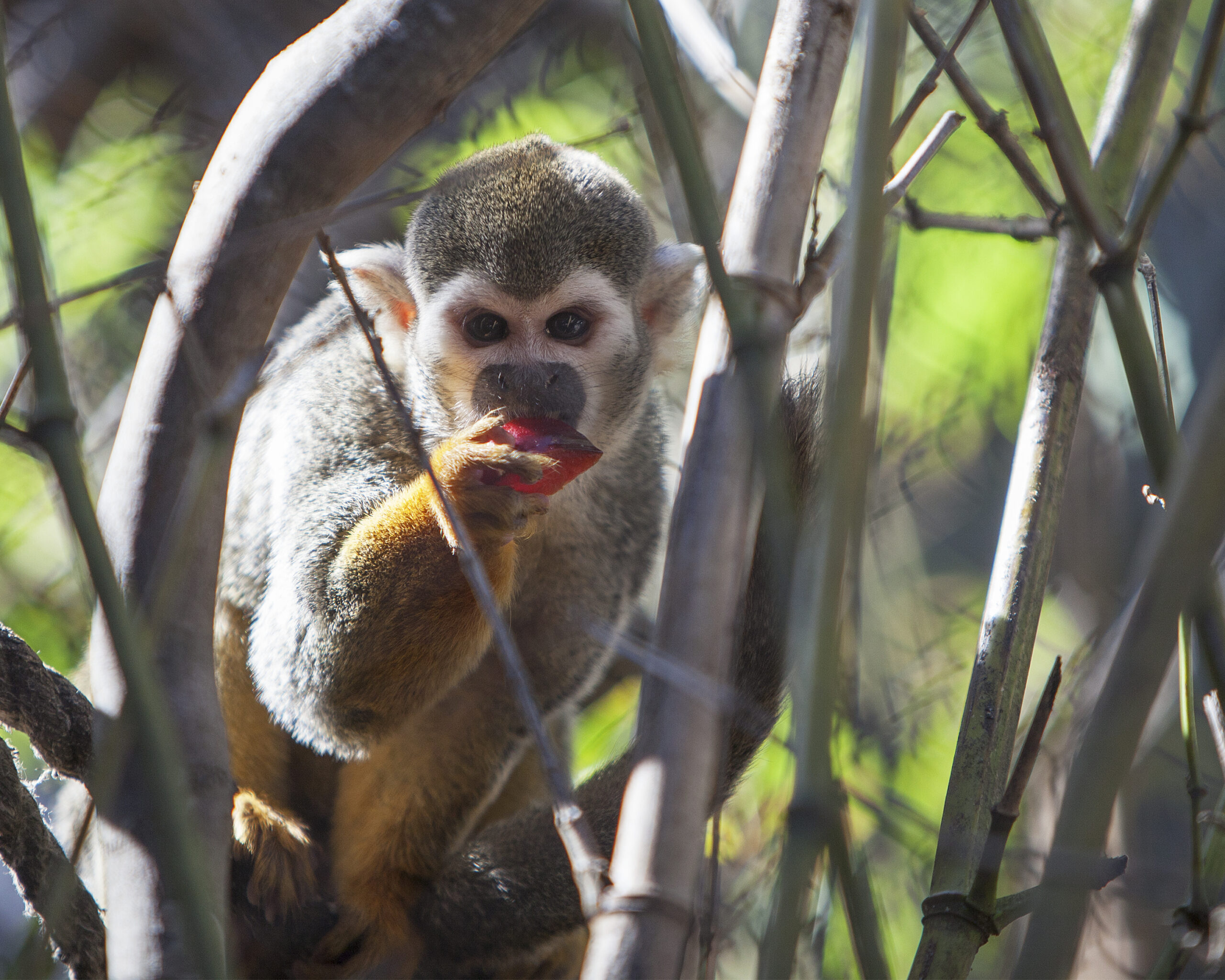 Our group of 15 squirrel monkeys is all male. When they arrived, they came in pairs and had to be introduced to one another to create one big group. It took four years for the large squirrel monkey group to coalesce.

You can find our squirrel monkey troop in the Thelma and Henry Doelger Primate Discovery Center.

Squirrel monkeys are small, weighing only one to three pounds. These monkeys have short, thick fur that is olive to grayish brown in color. Their face, throat and ears are white in contrast to dark hair on their crown and around the mouth and nostrils. They have white to yellowish underparts with orange lower limbs and rump. Unlike other New World monkeys, this species does not have a prehensile tail. They do use their 15 inch long tail for balance as they jump from branch to branch, however.

Lifespan is about15 years in the wild and up to 20 years in captivity.

Squirrel monkeys are found in the lowland rainforests in southern Central America and South America. Their range includes Panama to Peru, Bolivia, Paraguay and Brazil. They travel primarily in the lower levels of forests but use all levels for forage for food.

Squirrel monkeys live in mixed groups of 15-50 individuals, but groups can be as large as 100 animals. Both males and females form social hierarchies, with males usually being dominant. They are diurnal and territorial with home ranges including 32-320 acres. Groups use scent marking with urine to maintain these territories. Vocalizations like chirps and peeps are most often heard but up to 26 different calls are used to communicate.

This species is seasonally sexually dimorphic. Two months before breeding season begins males display physical changes and take on a “fatted” appearance from water and fat storage. Males can gain as much as 20% of their body weight in the process. It is thought that this makes them more attractive to females. During this time dominant males drive off juvenile and sub-adult males.

Breeding occurs during the dry season so that births coincide with the rainy season, when food is most plentiful. A single young is born every two years after a gestation period of 152-168 days. Young cling to the mother for the first two weeks, for the next several months other females begin to provide care as well. Young are weaned at five to six months and independent at about one year.

Common squirrel monkeys are listed as least concern by the IUCN. They are widespread and do not seem to be greatly affected by human settlement. These monkeys are, however, often captured for pet trade and scientific research. Other squirrel monkey subspecies are threatened due to habitat loss caused by deforestation for agriculture and human development.