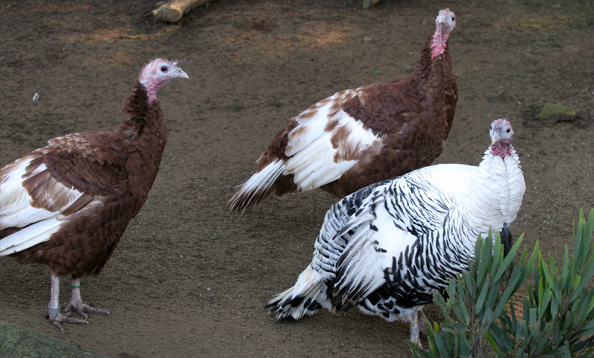 Our turkeys can be found near the northern entrance of the Family Farm.

Turkeys are large, stocky birds weighing almost 25 pounds. They have long legs and short rounded wings. Male wild turkeys are quite striking in appearance, with an overall blackish-brown body and bronze-green iridescent sheen. Flight feathers are barred with white and the brightly colored head is featherless. Depending on the season, males head and neck are either red, blue or grey. The wattle hanging under the beak is red. Their head is covered by growths called caruncles and the long fleshy object over the beak is called a snood. Males, or toms, also have a spurs on their feet and can grow long bristles on their chest. Females, in comparison, have a duller plumage and lack brightly colored heads and necks.

Juveniles are light brown with mottled dark brown wings. Domesticated turkeys typically have white and black plumage with the usual coloration on the head and neck.

Lifespan is about 1.5-2 years in the wild, although one turkey lived to 13 years old.

It is the mostly found throughout the United States and parts of northern Mexico and southern Canada. They are widespread in forests, pastures, grasslands, and wetlands. It is most commonly found in relatively open areas which provide nearby woods for nesting.

Turkeys are omnivorous; foraging for acorns, nuts, various seeds, berries and insects. They also occasionally consume amphibians and small reptiles such as lizards and snakes.

During the winter these birds gather in groups of up to 200, especially where food is plentiful. Throughout the rest of the year they are more commonly found in groups that consist of one male and several females or, after breeding season, small flocks of females with their chicks.

Male turkeys display for females by puffing out their feathers, spreading out their tails and dragging their wings. This behavior is most commonly referred to as strutting. They also use gobbling, drumming/booming and spitting as signs of social dominance, and to attract females.

Breeding season usually occurs between April-May. Nests are made by scratching a shallow depression in the ground in tall grass or in tangles of brush. Several females may lay eggs in a single nest but hens typically lay 4-17 eggs on their own. Eggs are incubated for 25-31 days and the precocial chicks fledge after just 24 hours. Young can fly in about 10 days and begin to roost in trees with adults after 2 weeks. Male chicks are independent by fall, while female chicks remain until around 10 months of age.

Turkeys are known to produce up to 15 distinct vocalizations. The iconic “gobble” of a male can be heard from a mile away.

Wild turkeys are listed as least concern by the IUCN. Their numbers were significantly reduced by the beginning of the 20th century due to overhunting and habitat loss. Today, the birds are estimated at nearly 8 million individuals. They now thrive in all 49 continental US states thanks to the efforts of conservationists who captured and relocated birds in order to repopulate areas where turkeys had historically inhabited.