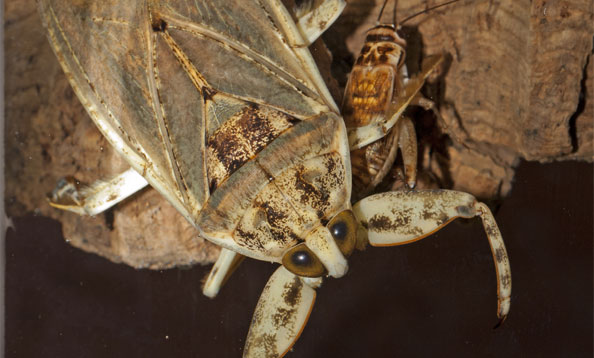 The Giant Water Bug has piercing, sucking mouth parts, and a short, pointed beak on the underside of the head. The other distinguishing characteristic is the fact that the wings overlap at the hind end of the abdomen, forming an X like pattern. Other than that, the sheer size of the insect and the unusual shape of the front legs help identify it.

They live mostly in clear, freshwater streams and ponds, preferring those with aquatic vegetation. Giant Water Bugs like slowly moving water, especially where there is emergent vegetation such as cattails. They usually grab hold of a plant near the surface, and stick their short breathing tube out of the water to allow them to breath while waiting for prey. With their powerful front legs they are able to grab other bugs and prey as big as small fish, frogs and salamanders. They pierce their prey with their sharp beak and secrete enzymes that dissolve the body tissues, thus allowing them to suck up the resulting liquid.

They prey on any small animal they can handle, including insects and other aquatic invertebrates. They also hunt vertebrates such as tadpoles, salamanders and small fish. Grasping and holding prey with their powerful forelegs, giant water bugs thrust their sucking mouthparts into their prey. In the Zoo, they are fed crickets.

Adult giant water bugs capture larger prey species by using their clawed front feet and chemicals which are injected into the body of the prey. The enzymes turn the prey’s insides into liquid, which the giant water bug can suck up.

The giant water bug is common and not endangered.

The giant water bug can be found at the Insect Zoo.