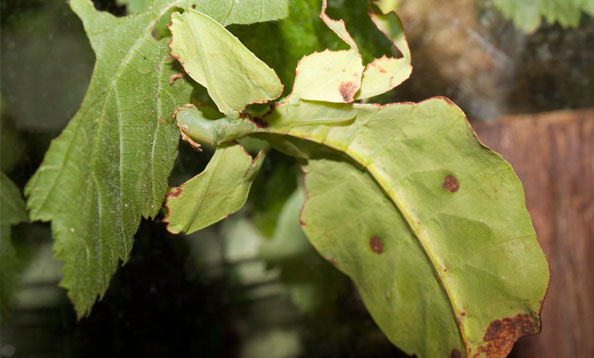 Leaf insectsflat, green insects that have a leaflike appearance. The female has large leathery forewings (tegmina) that lie edge to edge on the abdomen and resemble, in their vein pattern, the midrib and veins in a leaf. Females are flightless and so the hindwings have no function. The male has small tegmina and ample, non-leaflike, functional hindwings.

Leaf insects are native to the tropics of the Eastern Hemisphere. This species of leaf insect eats blackberries, rose and oak leaves.

This species of leaf insect is very quiet during the day, but becomes active during the night. When they walk they will walk in a stop-go kind of way as if they are moved by the wind. The males can fly once they become adults, and they generally will do this often when disturbed. The females cannot fly.

They are common and not endangered.

They can be found at the Insect Zoo.