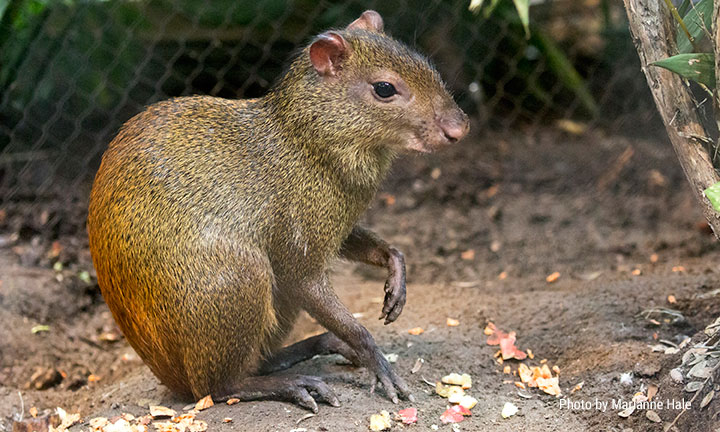 Our red-rumped agoutis can be found in the Fisher Family Children’s Zoo/Exploration Zone.

Red-rumped agoutis get their name from the reddish fur that covers their backside. They weigh between 6 ½ and 13 pounds and reach up to 2 feet in length. Females are larger than males. Agoutis have short tails, long legs relative to their body size, and sharp, hoof-like claws on their toes, allowing them to run quickly throughout the underbrush of the forest floor.

Like all rodents, agoutis have long incisors that grow throughout their lifetime, but their incisors are notably stronger than those of other rodents.

Red-rumped agoutis are terrestrial and found in rainforests and secondary forests in northern South America in Venezuela, the Guianas, Brazil, and Trinidad and Tobago. They are herbivores, feeding on fruits, nuts, seeds, leaves, and shoots. They will also store food for times of scarcity. Agoutis are important seed dispersers due to their habit of burying stores of food throughout their territories. Some species of trees depend heavily on agoutis for seed dispersal.

They have a range of alarm or distress calls which include grunts, squeals, and hind foot stamping. Like some other mammals, they also communicate with body posture and distinguish territory through scent marking. Predators include jaguars, ocelots, snakes and raptors.

These diurnal rodents are monogamous and live in pairs or family groups. They often travel and scavenge together to maintain a better lookout for predators. Their gestation period is up to 120 days and litters consist of 1 – 3 young. Both males and females invest energy in helping raise young.

This species is listed as Least Concern by IUCN. Local populations are often hunted extensively by humans but the overall population appears to be relatively stable. As long as there is sufficient cover for them to hide in, they seem to survive well even in disturbed habitats.