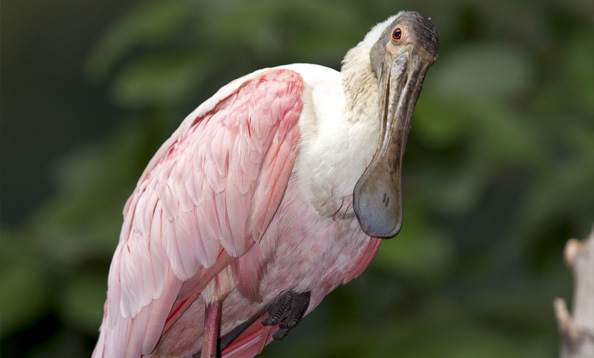 The roseate spoonbills can be found in the South American Tropical Rainforest and Aviary.

The Roseate Spoonbill is a large and slender bird, standing up to 32 inches with a 3 foot wingspan. Like many wading birds, they have characteristic long legs and a long neck. This bird gets its name from the spoon-shaped bill that becomes flat at its tip, the specialized shaped allows it to sift easily through mud.

Their colors range from pale pink to bright magenta. The wings and breast are rose colored and the back and neck are white. Upper wing feathers and base of the tail are deep red, while the shoulders and tail are sherbet orange. The bird’s legs are bright red and the head is yellowish- green. Males and females look similar, although males tend to be slightly larger. Juveniles are paler in color.

This species is found in northern and eastern South America, and in coastal regions of the Caribbean, Central America, Mexico, and the Gulf Coast of the United States. They prefer habitats with shallow salt or freshwater marshes, mangrove swamps and mudflats.

They feed primarily on crustaceans, aquatic insects, amphibians, slugs, snails and small fish. This species feeds in shallow water by swinging its sensitive bill from side to side as it walks.

Roseate spoonbills are very social; feeding and roosting together in great number. They also often congregate with other wading birds such as spoonbills, ibises, storks, herons, egrets and cormorants.

Breeding season varies throughout its large range. Roseate spoonbills are seasonally monogamous and engage in courtship rituals that include bill rattling and clasping, as well as gift giving. The couple works together to create a large, sturdy nest in a low tree. Females lay 1-5 eggs that are incubated for 23 days. Both males and females share incubation responsibilities and regurgitate food for chicks after hatching. Once mobile, chicks form small groups until they leave the nest around 35-42 days. Young take flight around 49-56 days.

Roseate spoonbills are listed as least concern by the IUCN. They were hunted extensively during the 1800s for their striking pink feathers to be used in women’s hats and fans. These birds are now protected under the US Migratory Bird Treaty Act of 1918. As a result, they have begun to recolonize areas along the Gulf Coast and are slowly increase in number. Current threats include habitat loss.