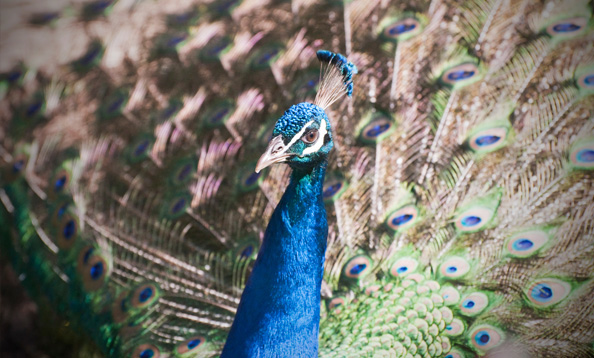 You can find our peafowl roaming freely throughout Zoo grounds.

Male peafowl are easily recognized due to their brilliant blue and green plumage and long tail feathers. Peacocks have an iridescent blue breast leading up to the head with white patches near the eyes. Their back and wings are barred with dark and light brown. Their long train is iridescent green that end in eyespots called “ocelli”. The train is actually made of highly elongated upper tail feathers, the short tail simply holds up the mass of feathers above. Both male and female have a crest atop the head.

Peahens are dull green, brown, and grey and lack the long upper tail feathers but can erect shorter feathers when threatened or competing with other females. Chicks are a yellowish-brown with barred wings.

Peafowl are native to India, Nepal, Bangladesh and Sri Lanka. They are quite resilient but prefer temperate or tropical deciduous forests with abundant roosting sites.

They are omnivorous and eat insects, worms, small amphibians, small reptiles, grains, flowers, and grasses. At the zoo, they forage for similar items.

Peafowl social structure fluctuates during the year; they are typically solitary or found in groups of 2-3 but during breeding season they can be found in groups of 1 male with 6 or so females. Males perform elaborate courtship displays and emit loud, high-pitched calls in order to attract females. Studies show that males with more impressive displays, long and healthy train feathers, and more eyespots are favored among females. Peahens will also become more aggressive to compete for access to males and keep other females at bay.

Indian peafowl are creatures of habit and can be found in the same general location for their entire lives. They are diurnal, foraging for food during the day and roosting in trees at night. Nests are located on the ground under low shrubs and consist of dry sticks and leaves.

Breeding season occurs from April to September; afterwards, females lay 3-5 eggs but occasionally up to 12. Males do not assist with the incubation process which takes approximately 28 days. Chicks are well developed and grow quickly. They fledge in about a week and are independent after just a few months.

Indian peafowl are listed as least concern by the IUCN. They have a large, stable population in the wild despite being occasionally hunted for meat and feathers.