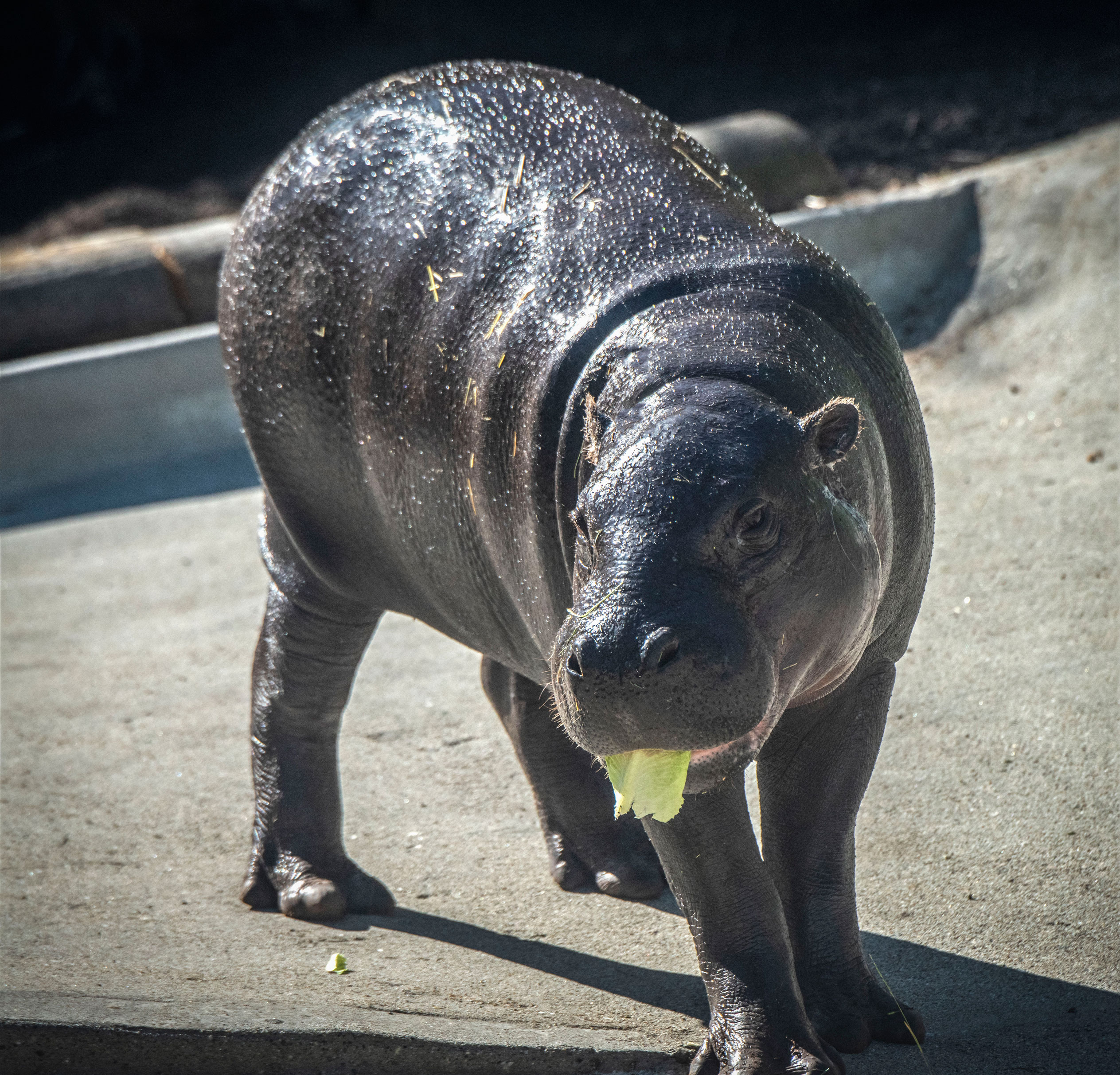 You can see our pygmy hippo behind the Lion House, next to the black rhino habitat.

Pygmy hippos aren’t just smaller than the Nile river hippos, they have different adaptations for a more terrestrial life. Their legs are proportionally longer and their feet less webbed.  They have proportionally smaller heads with only one pair of incisors. They stand 2.5 – 3.25 feet at the shoulder, are approximately 5 and 6 feet in length and weigh between 400 – 600 lbs. Nile river hippos can weigh up to 4000 lbs!  Like Nile river hippos, they excrete a pinkish fluid from their skin called “blood sweat”, which helps their skin to retain moisture and can act as a sunscreen.

Nile hippopotamuses inhabit river areas with deep water and adjacent reed beds and grasslands of Africa, south of the Sahara and along the Nile. Their range once included Asia and large parts of Europe, however.

The hippopotamus is an herbivore, feeding on grass, fallen fruit and occasionally on cultivated crops such as sugar cane or corn. At the Zoo, the hippos are fed a diet of alfalfa, horse chow and vegetables.

They are found in the coastal northwestern African countries of Sierra Leone, Guinea, Liberia and Côte d’Ivoire.  Their range does not overlap with that of Nile river hippos. Pygmy hippos inhabit forest, savanna and wetlands, and are never far from a water source.

Pygmy hippos are found alone or in small family groups. They communicate primarily through scent-marking with dung or through body language, not vocalizations. They are not territorial and will mostly ignore unknown hippos.  One calf is born after a gestation period of 6 – 7 months.  The calf is hidden on land for its first few weeks and its mother will come back to nurse every few hours.  After a few months the calf will start eating vegetation and will reach maturity between 4 and 5 years of age.  Their lifespan in zoos is between 30 – 55 years.  They are primarily active in the cooler hours of the night, foraging on land. They spent the majority of the heat of the day in the water or sleeping in burrows or wallows adjacent to a water source.

They are currently listed as Endangered by the IUCN.

While there is only one species of pygmy hippo today, there was once a species found on the island of Madagascar: Hippopotamus madagascariensis that went extinct 500 years ago.  Today pygmy hippos face a number of threats, from habitat destruction, degradation and fragmentation, being hunted for bushmeat, as well as due civil unrest in their native countries, making it difficult to implement protections.