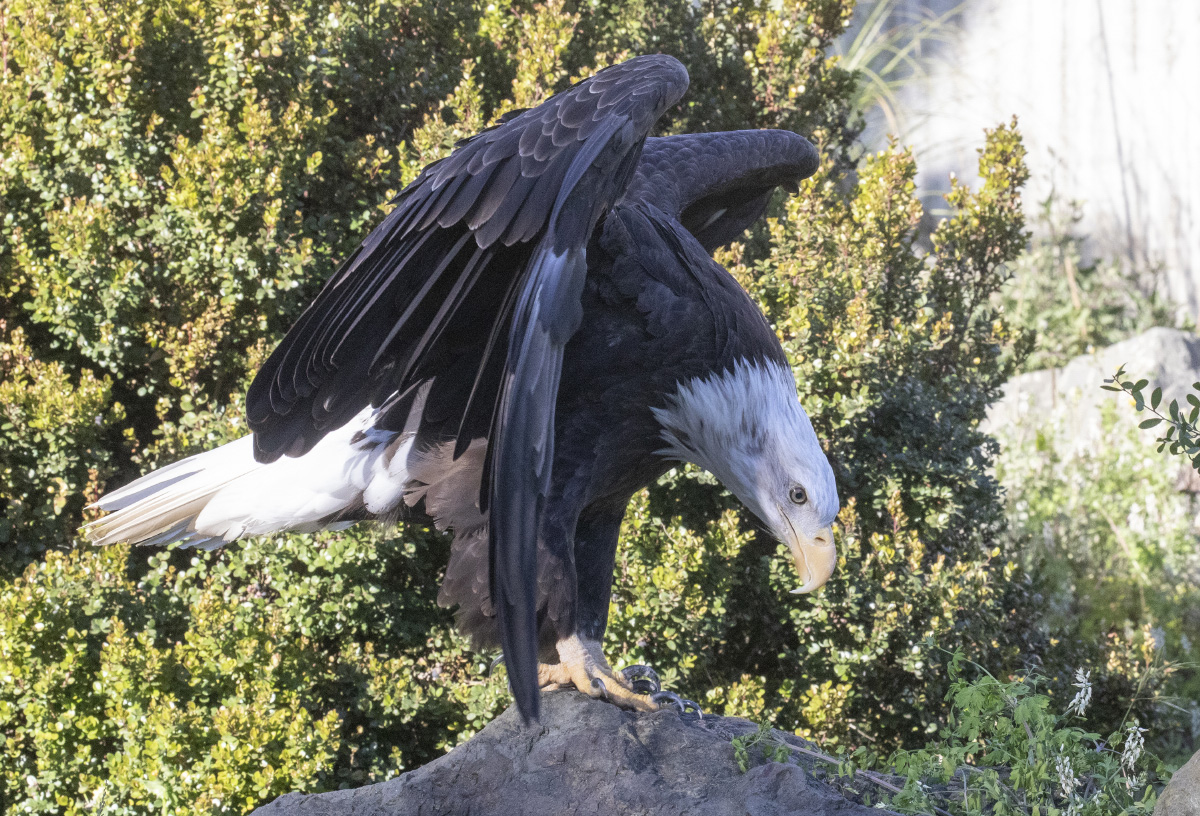 For over 20 years, the San Francisco Zoo helped to conserve bald eagles, maintaining the largest captive breeding and release program in the country. Beginning in 1991, the Bald Eagle Recovery Program, in conjunction with the Wildlife Institute, released over 95 eagles to sites in central and southern California, as well as Tennessee. The Zoo initiated its California Bald Eagle Breeding Program in 1985 to help with the recovery of the state’s bald eagle breeding population, which had declined from a historic high of approximately 400 pairs to fewer than 35 pairs in the 1970’s.

The zoo is home to a rescued eagle that was injured in the wild, and thus, cannot survive on its own.

The bald eagle is a large bird of prey with a wingspan measuring about six feet. Its average weight, however, is only about nine pounds – two pounds less than the average house cat. Its large bones are hollow, and the bird has a lot of feathers, making it appear bigger than it really is. As a result, the bald eagle usually takes fairly small prey, light enough to be carried into a tree for undisturbed eating. The bald eagle flies with deep strokes and soars on flattened wings.

Adult bald eagles are easily recognizable due to their bright white heads and tails, contrasting on a dark brown body and wings. Juveniles are mostly mottled brown and white. It takes about five years for young to develop their adult coloration, during that time they are often mistaken for golden eagles. Eagles’ beaks, eyes, and feet are yellow. Eagle beaks are sharp and powerful, and they have strong, grasping, taloned feet, which have small bumps on the bottoms of the toes to help the bird hold on to the slippery scales of a fish. Female are larger than males but the plumage is the same in both sexes; this is true in most diurnal species of raptors.

Vision is their most important sense, and eagle eyes are exceptionally powerful. Their large pale eyes see in color and can detect objects three to four times further away than humans. Eagles can rotate their heads up to 270 degrees which allows excellent monocular and binocular vision. Their hearing capabilities are about the same as humans bur their sense of smell is poor.

The call of an eagle is a loud, high-pitched scream, similar to a gull, but broken into a series of notes in rapid succession. The voice has been called unbecoming for a bird of its size and strength.

Bald eagles are found across North America, including Alaska, Canada, Mexico and across the lower 48 United States. They prefer coastal areas as well as large lakes and rivers where they have easy access to fish. Some inland populations of Canada migrate during winter but most birds are resident.

Bald eagles eat primarily fish but birds, medium-sized mammals, carrion, reptiles and amphibians are eaten opportunistically. At the Zoo, the bald eagles are fed a diet of rats, herring, mice and rabbits.

These birds may mate for life, adult coloration acts as a signal of sexual maturity. Adult birds are either solitary or found in pairs but groups of several hundred have been observed near feeding sites.

Bald eagles are diurnal hunters as they have poor night vision. They hunt by swooping low over rivers, streams and lakes, using their powerful talons to grasp fish that are swimming close to the surface. Bald eagles typically hunt from the air but will occasionally wade in the water to catch the exhausted or dying fish. Eagles do not chew their food, but tear it into small chunks and swallow. Swallowed food is stored in the crop, a pouched enlargement of the gullet that serves as a receptacle for food, and later goes into the digestive system. This allows the eagle to gorge itself at each kill.

Breeding season occurs throughout much of the year but is specific to each area’s population. They have an aerobatic courtship ritual considered the most beautiful of any raptor. Nests are usually found in tall trees or on cliffs and are made of branches and sticks and meticulously intertwined into a basket by the female. One to three white eggs are laid and incubated for about 35 days. Both sexes incubate the eggs and help care for the newly hatched chicks. Young eagles can feed themselves at 3-6 weeks and fledge at 10-12 weeks. These young birds are dependent on adults to bring them food for several more weeks until their ability to fly has improved.

Bald eagles are currently listed as least concern by the IUCN. In the early part of the 20th century, hunting eagles was a popular sport. Bald eagles were shot not only for their feathers, but because they were though as a threat to livestock and fishing industry. In more recent years, pollution greatly reduced their numbers. Pesticide runoff accumulates in fish, and the chemicals then accumulate in the eagles’ bodies. DDT in a female bald eagle’s body disturbs the eggshell-making process, causing her to produce very weak shells or no shells at all. Bald eagles once numbered 50,000 in the United States, but by the time the U.S. restricted the use of DDT in 1972, only 800 breeding pairs remained. Under the Endangered Species Act of 1973, the bald eagles have made a steady recovery and breeding pairs now number around 3,000.

By July 1995, the bald eagle had been downgraded from “endangered” to “threatened,” and in 2007, the U.S. Department of the Interior took the bald eagle off of the Endangered Species List. Laws like the Migratory Bird Treaty Act and the Bald and Golden Eagle Protection Act still prohibit the hunting or sale of eagles or eagle parts; it is illegal for anyone to collect eagle parts, even feathers, without a permit. For some Native American groups, the possession of eagle feathers is allowed, as these feathers are often used in traditional ceremonies.

Live Eagle Nest Cam! During breeding season, you can watch the Catalina Island eagles at the West End nest via live webcam!