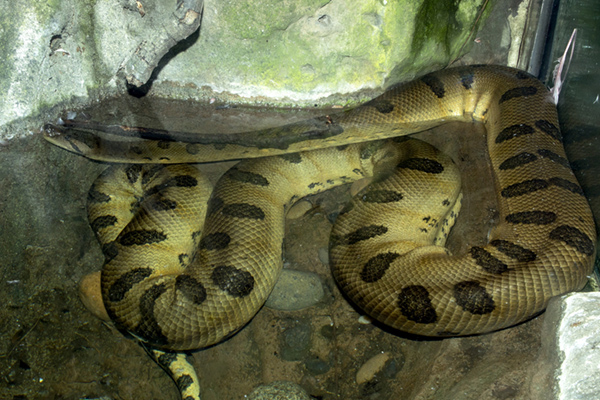 The name “anaconda” comes from the Asian Indian Sinhalese language, and originally referred to the reticulated python. A similar Tamil word for anaconda is “anaikolra” which means “elephant killer.” No one is sure how this name came to represent a South American snake, unless these two snakes — anaconda and python — were mistaken for the same species. Both snakes are excellent swimmers and are two of the largest snakes in the world. The early Spanish settlers referred to this snake as “matatoro” or “bull killer.”

This large snake is dark green with alternating oval black spots. There are similar spots with a yellow-ochre center along the side of the body. The pattern of the scales found along the black and yellow underside of the lower tail is unique to each snake and may be used for identification.

The head is large and narrow and is not distinct from the neck. The eyes and nostrils are on top of the head so the snake may be submerged while hunting. Its body is extremely stocky compared to other constrictors and it is extremely muscular. It is the heaviest snake in the world, weighing up to 550 lbs., and measuring up to 29 feet. The center of the body may be up to 12 inches in diameter.

The green anaconda can be found in tropical South America, east of the Andes in Amazon and Orinoco basins, and in Guianas, north to Trinidad, where they live in tropical rainforests, savannas, grasslands, scrub forests and deciduous forests. They much prefer to be in water; on land they can become tick-infested and they cannot move as quickly.

These carnivores eat a wild diet of capybara, deer, fish, turtles, caiman and dogs. At the Zoo, the anaconda is fed rabbits.

The anaconda is a nocturnal snake and spends much of its time in the water; it is also known as the “water boa.” Due to its large size, it may seem sluggish on land, but in the water is capable of surprising speeds both on the surface and under water. It has extremely keen senses and uses its tongue by flicking it to test the environment and search for prey. It usually waits in the water with only its snout extending above the surface; it will grab prey and constrict in the water to suffocate the animal or just drown it. Prey is rarely crushed, simply suffocated.

Courtship may extend over several months. Females are thought to emit pheromones to attract males. Often up to 12 males will cluster into a “breeding ball” by twining around the much larger female. Mating generally occurs during April and May. Gestation for the anaconda is approximately six months. They are viviparous, bearing anywhere from 20 to 40 live young instead of eggs. The young snakes are about two feet long and are precocial (able to hunt, feed and swim shortly after birth). They grow rapidly and reach sexual maturity at about 3-4 years old.

The green anaconda has no special status. All anaconda trade is prohibited in most South American countries. There is some export of live snakes to zoos, research, and the pet trade to fill quotas. Some illegal trade occurs, but their “dull” color isn’t popular. This snake has no real predators because of its size; human encroachment is the main problem.