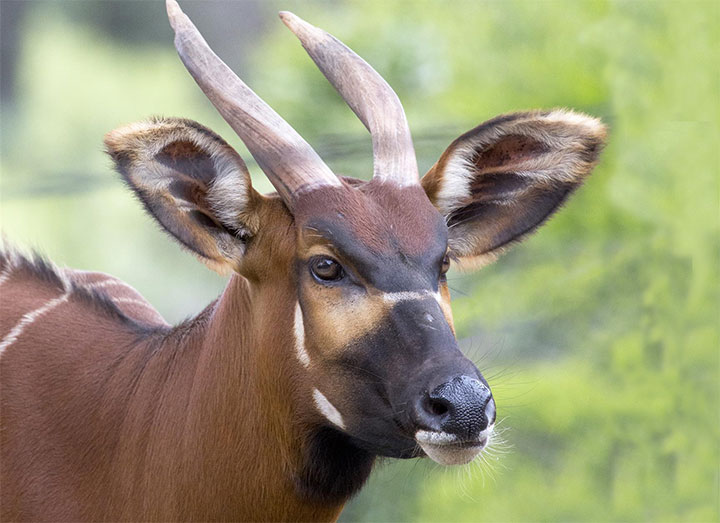 Bongos can be found near the Lion House, next to the black rhino habitat.

Mountain bongos have chestnut brown fur with vertical white stripes along their sides. Their face is quite distinct with a dark muzzle, white stripe between the eyes and white spots on their cheeks. Legs are patterned with patches of chestnut, black and white and a crest of long fur runs along their spine. Males tend to darken in color as they age. The bongo’s impressive horns can grow up to three feet long and when tilted back follow the curvature of their back. These are some of the largest forest dwelling antelope weighing between 530-650 pounds. Bongos have large ears that attribute to their strong sense of hearing and a prehensile tongue to grasp the vegetation they feed on.

Lifespan in the wild is unknown, and about 20 years under human care.

They are found in very fragmented areas in the highlands of Kenya including the Aberdares forests, Mount Kenya, and the Mau and Eburu forests. Bongos inhabit lowland forests as well as tropical jungles with dense undergrowth, up to an altitude of 12,800 feet.

Bongos are very shy animals that are mostly active at dawn and dusk. They are seldom seen in large groups; one dominant male and several females with young are typical with family groups not usually exceeding 20 individuals. When males mature they leave their maternal groups and remain solitary, sometimes living in small bachelor groups. They are not territorial and do not have a scent gland for marking like other antelope species. Occasionally males meet and spar with their horns in a ritualized manner. Serious fights are discouraged through visual displays in which both males bulge their necks, roll their eyes and hold their horns in a vertical position while slowly pacing back and forth.

Bongos have a wide range of vocalizations including grunts, snorts, mooing, and a bleat-like alarm call. When they are startled, they will disappear quickly into the forest, keeping their horns against their back.

Females give birth to a single calf after a 9 – 9 ½ month gestational period. Calves are left alone in dense vegetation for about a short period of time with the mother visiting periodically to nurse. This behavior allows the calf to remain hidden from predators while it is most vulnerable. Calves grow quickly and join the herd after about a week and are weaned at about 6 months.

Eastern mountain bongos are listed as critically endangered by the IUCN. A 2007 census concluded that there are only about 47-140 left in the wild. Their population’s rapid decline is due to habitat loss, illegal logging and poaching.

With mountain bongo populations decreasing, eighteen bongos from U.S. zoos were sent to the Mt. Kenya Wildlife Conservancy in 2004. These animals were used to establish a breeding herd for the possible release of future generation into the wild.

San Francisco Zoo & Gardens participates in the AZA Bongo Species Survival Plan and welcomed a birth of a female calf in October 2014.

What can you do to help Eastern mountain bongos?