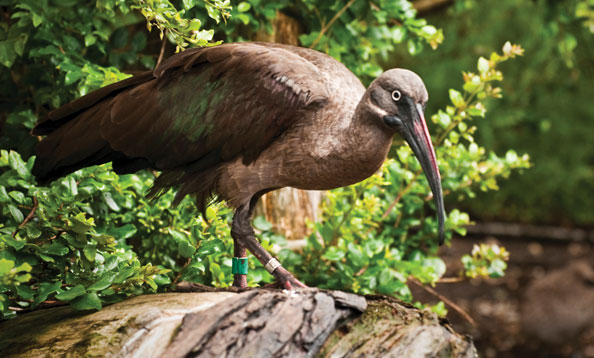 You can find our flock of hadada ibis in the African Aviary, adjacent to the African Savanna; they share their habitat with various other African bird species.

These birds are mostly brown and gray with subtle iridescent coloration. The mantle and back is olive green and bronze brown, and the rump and upper tail are glossy green, tan, and blue-black. There is a buff-white stripe on the cheek and a rosy patch that sweeps along the top of the bill. Both male and female birds of this species have this coloration, although juveniles are duller. They have broad and rounded wings that flap deeply.

They feed by touch rather than sight, using their long downward-curved bill to probe in mud and among tall grasses searching for prey.

Lifespan is up to 16 years under human care.

Hadada ibis are found across sub-Saharan central and eastern Africa. They are found in a variety of habitats including: grasslands, swamps, marshes, river edges and cultivated pastureland.

They are carnivorous, feeding on fish, insects, spiders, snails, crustaceans, amphibians, small reptiles and sometimes scavenging for carrion. At the zoo, they eat fish and mice.

Hadada ibis tend to forage in groups of 5-30 birds but gather at night in flocks of up to 100. They are particularly noisy at dawn and dusk on the way to or from these overnight roosts. Despite these social behaviors, they prefer to nest alone.

Breeding season peaks in the rainy season from October to December. Breeding displays include mutual bowing and display preening. Once paired, males usually gather nest materials, which they ritually offer to their mates. A flimsy, basket-shaped nest is built several feet off the ground in a tree, bush or man-made structure. Both males and females incubate 2-6 eggs for a period of 25-28 days. Once hatched, chicks are fed regurgitated food from both parents. Young fledge around 40 days, able to leave the nest around 49 days and fully independent by 60 days.

Hadada ibis are listed as least concern by the IUCN. After a decline in their population in the early 1900’s due to hunting and habitat loss, this species has made a partial recovery. They are protected by law under CITES, Appendix III in Ghana due to habitat destruction from excessive drainage. This species is common elsewhere in wild but is sensitive to extended drought conditions.