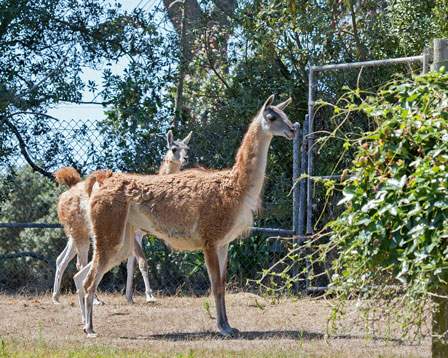 You can find our guanaco at Puente al Sur, a multi-species habitat featuring South American animals located on the north side of the Zoo near the Little Puffer train depot.

Guanacos are slender animals with pale brown backs, short tails, large heads, very long necks and big, pointed ears. They have a thick, woolly coat that ranges from light brown, brownish yellow or a rusty red. The belly, rump and insides of legs are white or cream colored while the head, ears, and nape of neck are grey. Their coat provides excellent camouflage to help it blend in with its grassland and desert habitat. They weigh between 200-300 pounds and stand 30-50 inches at the shoulder.

They are well adapted to the harsh conditions of their habitat and have special fat pads on their hooves to help keep their footing on rocky terrain. Their large eyes with thick lashes help to protect them from dust and dirt that is kicked up by heavy winds. A split upper lip can be used like fingers to grasp food. Guanacos will rarely drink water, getting nearly all the moisture they need from their diet.

Guanacos have a wide range across southern South America including Peru, Chile, Bolivia, Paraguay and Argentina. They prefer grasslands, scrub and other open dry habitats from sea level up to 13,000 feet.

They live in family groups of up to 30 individuals; usually including one dominant male, a harem of females and their young. During winter months, guanacos may join with other family groups and migrate in search of food. Juvenile males and other males without a territory often form bachelor group; practicing fighting and competing to challenge dominant males for control of a territory and females.

Communication is mostly done through vocalizations. Calls range from high-pitched trills to snorting and shrieking when alerting the herd of possible danger. Guanacos also use dung heaps to mark territory boundaries.

Guanacos reproduce seasonally and have a long gestation period of over 11 months. Young guanacos, called “chulengos” are precocial and can stand soon after birth and begin grazing within a few weeks. Young stay with the group until they are expelled by the dominant male at 11-15 months.

Guanacos are listed as least concern by the IUCN. The population has undergone a steep decline since Europeans arrived in South America- from nearly 50 million to 600,000. While still widespread and currently stable in numbers, populations are becoming more and more isolated from one another. Competition for food with domesticated animals, poaching, habitat loss and fragmentation are all threats to guanacos.