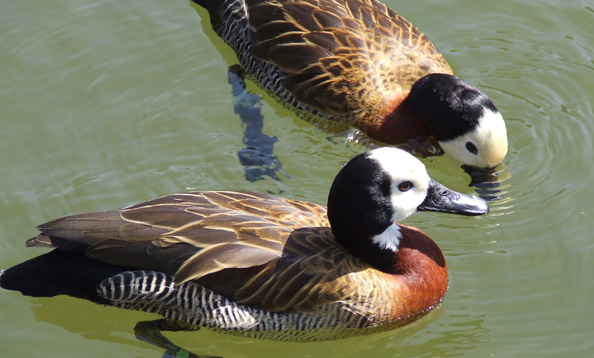 White-faced whistling ducks are medium-sized and have a grayish bill and feet, with a bright white face. The rest of the head and back of the neck are blackish-brown while their body is chestnut-colored. Their broad wings are banded with dark and light brown and black. Their long legs allow them to perch high in the trees at night. Females are about the same size but have a duller coloration. Juveniles lack the distinct white face and also have an overall duller plumage as well.

Whistling ducks have an extremely large range. They are found in small pockets in Central American, northern and eastern South America, as well as sub-Saharan Africa, and Madagascar. They inhabit a variety of wetlands and areas along lakes and rivers.

These ducks feed on grasses, seeds, and aquatic invertebrates. Studies suggest that this species feeds mainly at night, diving underwater to find most of its food.

They are social birds and can gather in flocks of several thousand outside of breeding season. Whistling ducks embark on seasonal migrations in response to food and water availability, otherwise remaining in the same general area.

Breeding occurs in the rainy season throughout their range. These birds will usually nest in pairs or small groups, but sometimes in larger colonies. Nests are a simple shallow depression in the ground that are lined with reeds and grasses. Females lay 4-13 eggs that will be incubated for 26-28 days. Chicks hatch with a covering of white down and fledging after about 8 weeks.

Immediately following breeding season, these ducks begin an 18-25 day moulting period. During this time, they are not able to fly and take cover in dense vegetation in order to avoid predators.

White-faced whistling ducks are listed as least concern by the IUCN. However, threats include avian disease, hunting and loss of habitat.