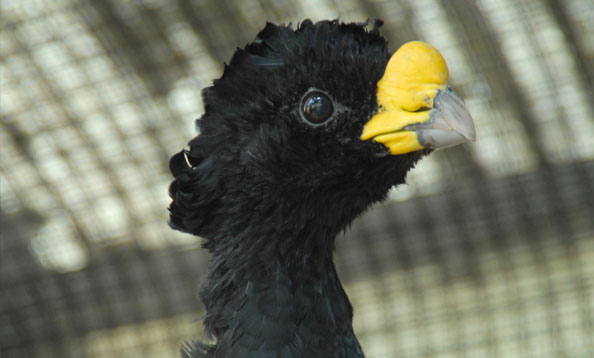 You can find the great curassow in the South American Tropical Rainforest and Aviary.

They are the largest curassow species; growing up to three feet in length. They have broad, rounded wings that make them quite awkward in flight. These birds are known for the distinctive curled feathers on top of their heads and long tails. Males are predominantly black with white feathers on the belly and under the tail. Their feathers are glossy and in certain light, have a blue hue. Males also sport a bright yellow knob at the base of the bill. Females vary greatly in color; most are a reddish-brown or black with a striped pattern on the head and tail. Occasionally females will have a primarily striped coloration with a light brown breast. This species exhibits sexual dimorphism, as females also lack the yellow knob on their bill.

Lifespan is up to 24 years.

The range of the great curassow extends from eastern Mexico and through Central America to western Ecuador and Colombia. They prefer lowland humid forests and mangroves.

They primarily eat fallen fruit but will also eat seeds, insects and small lizards. At the zoo, their diet consists of seeds and fruit.

Like other curassows, this large forest bird spends much of its time foraging for food on the forest floor. They are monogamous birds and are typically found in pairs or small groups. Males will utter a high-pitched whistle to alert the group of danger. Otherwise they communicate with grunting or peeping sounds or loud humming during breeding season.

Breeding season varies throughout its range but usually occurs from late winter to spring. Nesting takes place between March and May. The pair creates a nest in a tree fork or depression not far off the ground. Females incubate one or two white eggs for about 30 days. Chicks are precocial and grow quickly. Fledging occurs around 20 days and young are independent soon after, although they may remain in the family group for an extended period.

Great curassows are listed as vulnerable by the IUCN. Major threats include habitat loss due to logging, overhunting and collection for pet trade.