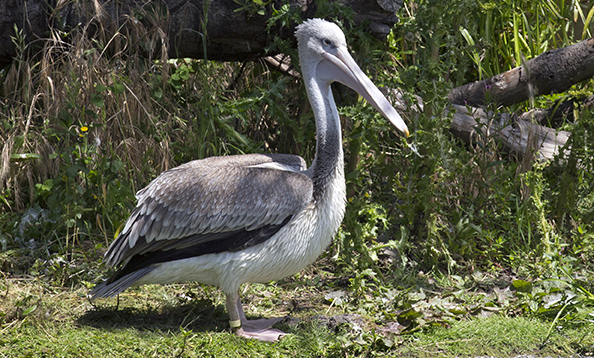 You can find the Pink-backed pelicans in the lake surrounding Eagle Island, near Bear Country.

Pink-backed pelicans have mostly grey plumage with a pinkish back and underparts. The pink color comes from a gland and is spread while preening. Pink-backed pelicans are one of the smallest pelican species. They are approximately 49 – 51 inches in length, with a bill length of 11 – 15 inches and a wingspan of 7 – 9.5 feet. They weigh between 9 – 15.5 pounds, with females being slightly smaller than males. Pink-backed pelicans may live between 15 – 25 years in the wild and up to 54 years under human care.

Pink-backed pelicans are found near freshwater lakes, rivers, ponds, swamps, particularly in shallower areas with plenty of vegetation. They range from Sub-Saharan Africa south to Botswana and the western Arabian Peninsula along the Red Sea.

They feed almost exclusively on fish and prefer smaller-sized fish, but have been observed eating fish weighing almost a pound. They forage alone and will ambush prey with a quick lunge.

While pink-backed pelicans hunt for food alone or in small groups, they roost and breed in flocks. Breeding can take place year-round and unlike many pelican species, pink-backed pelicans nest in trees. After courtship, an average of two eggs are laid and incubated by both parents. Lacking a brood patch, pelicans use their feet to keep eggs warm. Both parents will help to raise the young, who will fledge between 70 – 85 days. Pink-backed pelicans reach sexual maturity between 3 – 5 years of age.

The IUCN has designated Pink-backed pelicans as Least Concern. Threats include draining wetlands, logging at nesting sites, and pollution.