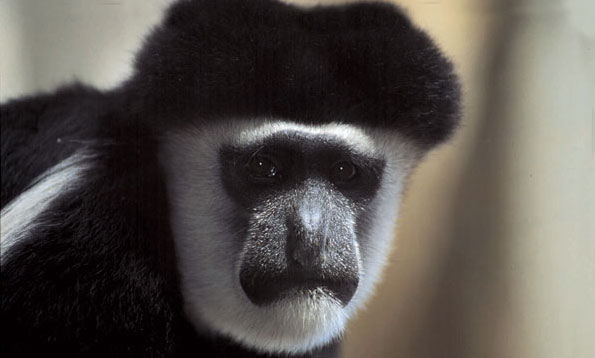 Our colobus monkeys are currently off-exhibit and cannot be viewed.

The colobus has glossy black fur that strongly contrasts with the long white mantle, whiskers and beard around the face and bushy white tail.

They have a lightweight bone structure and elongated limbs make it easier to leap from branch to branch. A hand with four fingers and no thumb provides a strong grasp on branches as the animal moves through the trees. In fact, the name ‘colobus’ means ‘mutilated one’ and refers to the missing thumb.

Colobus have a complex, multi-chambered stomach to help digest large amounts of leaves. Other adaptations for eating a primarily leafy diet include an enlarged salivary gland to help soften food and specialized bacteria to break down and draw energy from leaves.

Lifespan is about 20 years in the wild, and up to 30 years under human care.

The habitat of a colobus includes primary and secondary forest, riverine forest, and wooded grasslands in equatorial Africa. However, they are found at higher density logged forests more so than other primary forests between Gambia and Côte d’Ivoire.

Colobus are herbivorous, eating leaves, fruit, flowers, and twigs. At the Zoo, they are fed a diet of fruits, vegetables, bread and monkey chow.

They live in troops of about 5 to 15 individuals, usually including a dominant male, several females, and young. Each troop has its own territory, which is well defined and defended from other troops. Colobus communicate with vocalizations; the most distinct being the dominant male’s roar that is usually heard in the morning and is thought to help reinforce territories.

The colobus is one of the most arboreal species of African monkeys and rarely descends to the ground. Although they are diurnal this species actually spends much of the day sleeping, foraging for food and moving from tree to tree whenever awake.

Colobus breed about once every two years though breeding is not strictly seasonal. Births are timed so that weaning occurs when food is most plentiful. Young are born after a 5-6 month gestational period and both mother and father will care for the infant. Females of the group will also assist with parenting as well. Adolescent males will leave the birth group and remain solitary or form small bachelor groups until they can take control of another male’s harem.

Colobus monkeys are listed as least concern by the IUCN. Although, in the past colobus have been hunted excessively for their beautiful fur, as well as for skin and meat, leading to its extermination in some areas. Today, its greatest threat is habitat loss as forests are cleared for timber and agriculture.

The San Francisco Zoo participates in the AZA Species Survival Plan for the black and white colobus monkey, which manages the species and works to educate the public about this and other threatened and endangered species.