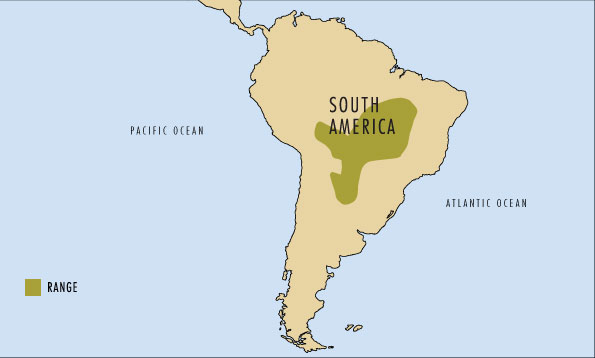 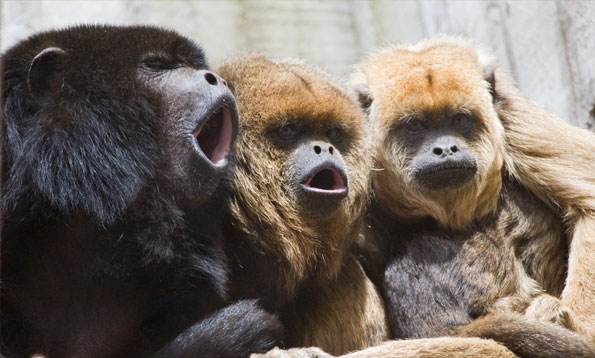 The Zoo’s black howler monkeys are currently off-exhibit and cannot be viewed at this time.

The male howler monkey can weigh from 15 to 22 pounds, while the female weighs about 12 pounds and is generally 75% smaller than males. Males are all black; while females are yellow-brown or olive buff. All infants are born with straw-colored fur but will change to black as young males mature. Howlers have a strong prehensile tail that is so powerful that when a monkey falls it can often save itself by grabbing onto a limb with its tail.

The angle of the lower jaw and the hyoid bone are both greatly enlarged. A special bony pouch is an offshoot of the larynx just beneath the throat and acts as a resonance box, amplifying vocalizations. These chambers are bigger in the males than the females, so the male calls are much louder and deeper.

These herbivores eat a diet of leaves, fruits, and other vegetable matter in the wild, while at the Zoo, they eat leaf eater chow, yam, bananas, grapes, leafy greens, browse and canned primate diet.

Howler monkeys are found in groups of 3 to 19, and include 1 to 3 adult males, 2 to 7 adult females and their young. Young males are expelled upon reaching maturity; or sometimes leave on their own. Individual males seek to join existing groups; without combat, they will attach themselves to a selected group and may become the dominant male. A striking feature of howler groups is that one of the adult males, usually the biggest, is always clearly dominant.

Howlers typically breed every 7 to 14 months throughout the year. A single birth occurs after a 180-194 day gestational period; although twins are born on occasion. Young howlers cling to the mother for nearly a year, first to her belly fur then moving to her back.

Their vocalizations have been described by some observers as deep, carrying growls comparable to the roar of lions. The cries are made by males and may be emitted at any time the animals are active or communicating the troop’s location and territory to other troops in the area. The howls of females are much softer. Roaring and scent-marking serve to delineate territories and help prevent competition for resources.

Howler monkeys are classified as least concern by the IUCN and are on appendix II of CITES. Although populations are stable they have been extensively hunted for bushmeat due to their large size and are threatened by habitat loss. Thousands were destroyed in southern Mato Grosso, Brazil, during the 1970’s when large fires were started to create pastureland.

Fortunately, this species adapts well to disturbed habitats and can survive in smaller territories and logged forests.