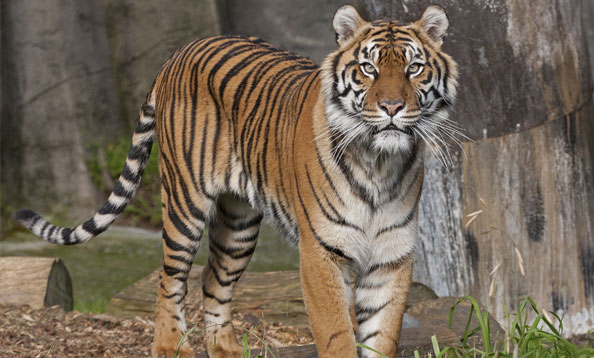 You can see our Sumatran tigers in the big cat grottos near the Lion House.

The Sumatran tiger is particularly well-suited for life in the deep jungle. The fur on the upper parts of its body ranges from orange to reddish-brown, making it darker in color than other tigers. Their throat, chest, insides of limbs and underbelly are white or cream colored. A darker coat and thick black stripes provide excellent camouflage. Also unique to this subspecies are distinctly long whiskers, which help them navigate dark, dense forests.

Lifespan is 15 years in the wild and about 20 in captivity.

Sumatran tigers are found in Indonesia on the island of Sumatra, off the Malaysian Peninsula. These nocturnal cats inhabit evergreen forests, swamp forests, grasslands and tropical rainforests.

In the wild, Sumatran tigers primarily eat wild pigs and sambar deer, but will also hunt tapir, monkeys, birds, and fish. At the Zoo, the tigers receive fortified horsemeat, chicken and rabbit.

Sumatran tigers are solitary animals, except during breeding season and females with dependent young. A male’s range may overlap the ranges of several females but not other males’ ranges. Females are not territorial and adult females sometimes share a home range. Tigers are not sociable but may have an amicable relationship with known or related tigers. Avoidance rather than fighting seems to be common.

Tigers rely on vocalizations like purrs, grunts, and loud roars to communicate. Scent marking with urine and feces, and tree scratching is also used to establish and maintain territories.

To hunt, tigers depend on sight and hearing more than on smell. Tigers stalk slowly through cover, approaching prey from side or rear, then leaps, grabbing prey by the throat for a quick kill. Tigers fail at least 90% of their hunting attempts.

Females are sexually mature between 4 – 5 years and give birth every 2 – 2 1/2 years. A litter of 1 – 6 cubs is born after a 102 – 112 day gestation period, although 3 or 4 cubs are typical. Born small and helpless, they do not begin to travel with their mother until they are 5 or 6 months old. The cubs are taught how to hunt and are able to make kills at 11 months.

The Sumatran tiger is listed as Critically Endangered by IUCN and is on Appendix I of CITES. Major threats include habitat loss, poaching and prey depletion. A 1978 census estimated the wild population at about 1,000. Since then, much of the favorable tiger habitat has been disrupted or destroyed by human activity. Consequently, the wild Sumatran tiger population is now estimated at around 400.

Poaching is the most immediate threat to tiger populations. Bones, teeth and claws are prized for use in traditional Chinese medicine while the demand for pelts is also high.

Until recently, there were nine tiger subspecies. The past few decades have witnessed the extinction of three subspecies, the Caspian, Bali and Javan tigers. 2009 estimates of the six remaining subspecies in the wild are as follows: Bengal 2,500, Indochinese 2,500, Sumatran 500, Amur 350, Malayan 700, and the South China tiger is thought to be already extinct in the wild.

The San Francisco Zoo participates in AZA’s Sumatran Tiger Species Survival Plan. The zoo welcomed the birth of a female cub in 2013.